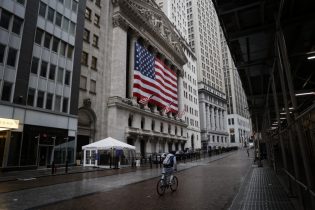 NEW YORK (Reuters) – The Federal Reserve’s unprecedented stimulus measures did little to brighten Wall Street’s immediate outlook on coronavirus-ravaged stocks, as concerns remained about the lack of a government stimulus package and the ability to contain the pandemic.

Stocks sold off on Monday even as the Fed pledged to expand purchases of U.S. Treasury and mortgage-backed securities and implement measures to backstop credit for households, small businesses and major employers — part of a series of wide-ranging measures the central bank has rolled out in recent days to stabilize the markets and the economy.

The moves have helped ease a liquidity squeeze in funding markets and signaled that the Fed was willing to take extraordinary steps in order to boost the economy. But investors said the Fed’s measures alone are unlikely to stem the stock market’s decline. The S&P 500 has plunged more than 30% in 22 trading days — the fastest such drop in its history, according to BofA Global Research.

“These efforts alone are not going to do anything against the virus – that’s the big problem,” said Scott Brown, chief economist with Raymond James in St. Petersburg, Florida. “We are going to take a pretty big economic hit here and economists have been revising their growth outlooks down and down and down every day.”

An initial lift to stock futures following the Fed announcement faded quickly. The S&P 500 <.SPX> was down more than 2% in afternoon trade, putting the benchmark U.S. index down more than 33% from its Feb. 19 record closing high.

Investors are looking for signs of whether efforts to keep Americans and Europeans isolated will slow the rates of new infections and deaths tied to the coronavirus.

Many have been disconcerted by lawmakers’ inability to enact an economic stimulus package that Treasury Secretary Steven Mnuchin said carried a $2 trillion price tag. The stimulus package failed to advance in the U.S. Senate on Monday as Democrats said it contained too little money for hospitals and not enough restrictions on a fund to help big businesses.

Daniel Wiener, an investment adviser who runs a newsletter for Vanguard investors, said the Fed seemed to be stepping in with necessary moves at a time of political paralysis.

“The Fed is jumping in here because the House, Senate and White House haven’t been able to figure out what to do,” Wiener said.

Initial estimates of the pandemic’s economic fallout have grown bleaker in recent days. U.S. unemployment could hit 30% and second-quarter economic output could be half the norm, St. Louis Federal Reserve President James Bullard told Reuters in an interview. Morgan Stanley equity strategist Michael Wilson said in a note on Monday that his base case was for a 13% decline in earnings for S&P 500 companies this year.

Scott Minerd, global chief investment officer at Guggenheim, noted that the market fell 57% during the 2007-2009 financial crisis and 49% in the 2001-2002 recession. That could mean stocks still have plenty of room to fall, as the damage to the economy from the coronavirus outbreak may be greater than what it suffered in those two prior downturns, Minerd said in a note to investors last week.

“We don’t even have to get to financial crisis levels for stocks to fall another 10 to 20 percent, but there’s good reason to believe that this is potentially worse than the financial crisis,” he said.