From Past History: It’s Highly Likely the Groups Behind Today’s Riots are Domestic Terrorists, Revolutionary Communists, US Based Radical Islamist Orgs and Others Related to the Democrat Party 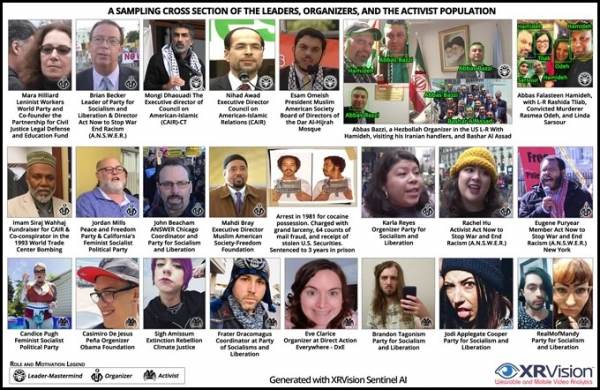 Recent riots in the US instigated throughout so many Democrat-led cities around the country are hardly spontaneous.  They appear coordinated.

It is highly likely that these riots are related to the same individuals involved in similar activities over the past year or years.  These people are likely related to US based Islamist Organizations, domestic terrorists and others related to the Democrat Party.

There clearly was no reason for the mass riots taking place around the country after the death of the individual at the hands of the police in Minneapolis, Minnesota.  Everyone who saw the police brutality was appalled and outraged at the sight of the policeman kneeling on the victims neck for an incredibly long period of time.  The man died.  But nothing warrants the wholesale destruction of property and further injuries and deaths around the US since that event.

It is clear there is more to this than meets the eye.  We believe we have identified some of those who are behind the riots around the country.  We are able to say this because similar activities occurred over the past year and we identified the actors related to those events and believe the same actors are likely involved in the current riots as well.

In early January, 2020, the Iranian Quds force commander was dead.  The man responsible for hundreds of US soldier deaths in Iraq had reached the end of his time on earth.  But Yaacov Apelbaum writes, not everyone in America was happy to hear the news that such an evil man was dead:

Within hours of the news that the Iranian Quds force commander, Qassem Soleimani, was killed there were over 200 US-wide pro-Iran demonstrations. These well-attended events were organized exclusively by the Red Green Alliance, an amalgam of communist/socialist/black militant and Muslim organizations. The bulk of the red part of this alliance was represented by the Party for Socialism and Liberation (PSL) and ANSWER (Act Now to Stop War and End Racism). The green element of the alliance included a number of Islamic organizations such as CAIR (Council on American-Islamic Relations) and several of its affiliate Muslim Brotherhood groups, the National Iranian American Council (NIAC), the Muslim Anti-Racism Collaborative, Black Lives Matter, and representatives Rashida Tlaib, Keith Ellison, and Ilhan Omar.

Evaluating the demonstration timeline, it is remarkable just how quickly the activists responded to the call to hit the streets. In the 24 hours between the news of Soleimani’s death on January 3rd and the early morning of January 4th, when the boots were on the ground, the organizers pulled all-nighters, printing and mounting thousands of signs and banners. They also solved complex logistic problems of transportation, food, and communications—all hallmarks of an efficient bureaucracy and well-funded organization.

Per an extensive analysis of participants at the pro-Iran rallies, it was quickly discovered that there were three groups of individuals involved in the protests, classified as the leaders, the organizers and the activists:

Our hypothesis is that the same groups of individuals are likely involved in the riots going on today in the US.

The leaders in the pro-Iran protests are described by Apelbaum as follows:

The overwhelming number (93%) of the Leaders that ordered the mobilization of the Organizers and Activists and dictated the agenda for the rallies came from US based Islamic organizations. The leading one was CAIR.

These Leaders have family connections in the Middle East and periodically travel there on pleasure and business. Over 87% of the Leaders are engaged in some form of US lobby activity on behalf of a Middle Eastern country. The nature of the lobbing is mostly related to promoting the interests of an Islamic fundamentalist party and is associated with either Turkey, Iran, Qatar, Libya, and Algeria.

Calls for Violence in NYC in Late January 2020

Another recent event not fully addressed in todays MSM was related to a call for violence in New York City in late January 2020.  Yaacov Apelbaum also discusses this event:

“The streets are ours. The trains our ours. The walls are ours. This moment is ours. How will you and your crew build and fuck shit up for #FTP3 on #J31 (THIS FRIDAY)? Issa mothafuckin’ movement.”

Three days later, on January 31, swarms of flash mobs carrying Palestinian, anarchist, and Antifa flags flooded several NYC MTA stations. The violence that ensued immobilized several transportation hubs in the city and resulted in hundreds of thousands of dollars in damage to equipment and forced a large mobilization of NYPD and emergency service resources.

A video was released that discussed the violence called for in New York City and Apelbaum reports:

Of course, this could all be just my take on it but having been in the business of evaluating threat intelligence for a long time, I tend to take seriously any video that features a masked and Kafia clad individual who uses a software voice modulator to mask their identity in a call for a violent and armed intifada especially, when they have an established track record of delivering the goods.

Within a few minutes after having set up his search requests, Apelbaum was able to identify the leaders of the calls for violence in New York City in late January:

The team was made up of the following individuals:

The leader, Amin Husain, along with Marz Saffore, were also identified at another protest in NYC in 2019 at the Whitney Museum:

The leader, Amin Husain, is the classic example of a domestic terrorist.  He has connections to the Middle East and has publicly endorsed terrorism and has called for a a US Intifada.  He was involved in Occupy Wall Street and has publicly demonized America.  He and his comrades have numerous connections to the Democrat Party.  [There is much, much more at Apelbaum’s post here.]

It’s clear that the recent riots around the country are not spontaneous.  They are coordinated and planned.  There is a very high probability these riots are related to the same individuals involved in similar activities over the past year.

These people are likely related to US based Islamist Organizations, domestic terrorists and others related to the Democrat Party.

Joe Hoft
Joe Hoft is the twin brother of TGP’s founder, Jim Hoft. His posts have been retweeted by President Trump and have made the headlines at the Drudge Report. Joe worked as a corporate executive in Hong Kong and traveled the world for his work, which gives him a unique perspective of US and global current events. He has ten degrees or designations and is the author of three books. His new book: ‘In God We Trust: Not in Lying Liberal Lunatics’ comes out soon.
@joehoft
* All fields are required.

Success!
New York’s Governor Cuomo, Health Commissioner Zucker and Executive Deputy Commissioner Dreslin Have Coronavirus Blood on Their Hands
The People of Hong Kong Praise President Trump for Yesterday’s Speech on China – “He Said What We All Are Thinking”
From Past History: It’s Highly Likely the Groups Behind Today’s Riots are Domestic Terrorists, Revolutionary Communists, US Based Radical Islamist Orgs and Others Related to the Democrat Party
REMINDER: General Michael Flynn Was the Victim of Not One But TWO Rotten Deep State Judges – What Are the Odds?
BREAKING EXCLUSIVE: According to Attorney the DNI Allegedly Has Call Records Between Seth Rich and WikiLeaks – It’s Now Presumed Brennan’s CIA Was More Involved Than We Thought
See more…
Gateway Pundit
Where Hope Finally Made a Comeback.

Tap here to add The Western Journal to your home screen.
×