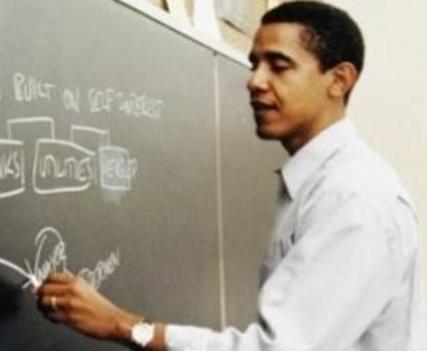 Former community organizer and failed president Barack Obama published a message on Monday morning to the mass protest movement that shook America to its core this weekend.

Barack Obama taught the principles of Saul Alinsky while in Chicago. There is even this photo of Obama the community organizer teaching Alinsky to a classroom of students.

Barack Obama published a statement on the mass violence that spread across America like a cancer this weekend.
Of course, Obama cheered the traumatic weekend as a starting point for change.

I wrote out some thoughts on how to make this moment a real turning point to bring about real change––and pulled together some resources to help young activists sustain the momentum by channeling their energy into concrete action. https://t.co/jEczrOeFdv

In his message to the mob Obama claimed only a “small minority” of leftists were involved in the mass destruction and violence.

These are “white supremacists” now.

Looting Target to fight police brutality. Someone explain how this helps the cause? pic.twitter.com/z44QoUCVQk

Even after his presidency Obama still supports the criminal mob.

The radical-left formally divorced itself from America last night. They are domestic terrorists and enemies of the United States. They should be treated as such. pic.twitter.com/GOA3msSOb6

Jim Hoft
Jim Hoft is the founder of The Gateway Pundit, one of the top conservative news outlets in America. Jim was awarded the Reed Irvine Accuracy in Media Award in 2013 and is the proud recipient of the Breitbart Award for Excellence in Online Journalism from the Americans for Prosperity Foundation in May 2016.
Gateway Pundit