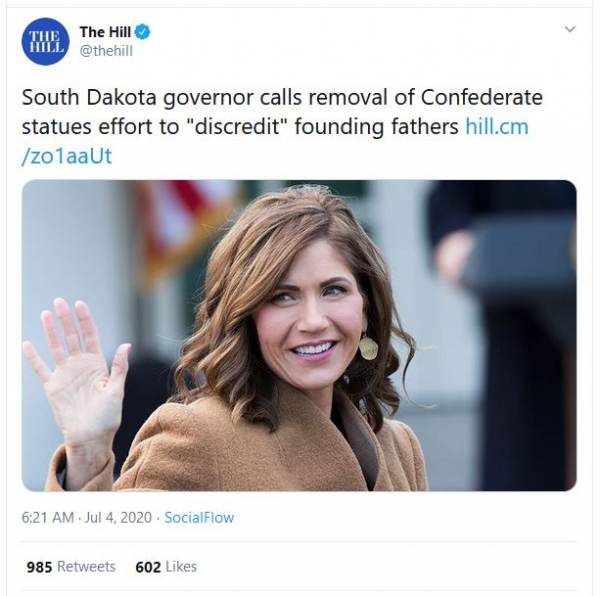 Fake News on Steroids.
The far left media is making up completely fraudulent quotes now to smear the Republicans.

The Hill reported on Saturday that South Dakota Governor Kristi Noem called the removal of Confederate statues was an effort to “discredit” our Founding Fathers.

This would be quite a quote if it was true.
But it’s not true.
It was completely made up to make the popular Republican governor and the Republican party look racist and stupid.

“Across America these last several weeks, we have been witnessing a very troubling situation unfold. In real time, we are watching an organized, coordinated campaign to remove and eliminate all references to our nation’s founding and many other points in our history. The approach focuses exclusively on our forefathers’ flaws, but it fails to capitalize on the opportunity to learn from their virtues. Make no mistake, this is being done deliberately to discredit America’s founding principles by discrediting the individuals who formed them so that America can be remade into a different political image.”

Noem said NOTHING about the Confederacy.
Democrats sure are desperate to fool their base and black voters.

UPDATE– They finally made a correction.