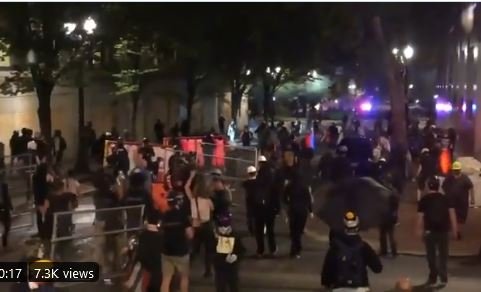 Remember when Obama told us that these protesters were righteous and peaceful?

He told us that they just want justice and to make America a better place, right?

I want you to take a second and think back to the last time you actually saw a “peaceful” BLM protest. And I am not talking about 15 minutes of protest that morphed into a slug-fest. I mean a peaceful Black Lives Protest from start to finish…

MORE NEWS: [VIDEO] Check Out These White BLM Rioters Smashing All The Car Windshields in a Parking Lot

If you think of one, let me know, because I couldn’t recall any.

Do you believe we’re in a “Spiritual War” right now in America?

The reality is that we’re watching American businesses burn, and innocent citizens beaten in the streets by Barry’s “peaceful BLM protesters” and Ted Wheeler’s Antifa commies.

They all belong to the Democrats.

And when businesses are not being burnt down, and citizens aren’t being beaten silly, they’re being intimidated and bullied.

That’s what happened to a couple who was trying to eat a meal at a restaurant.

A mob of BLM supporters forced everyone in the restaurant to “raise a fist” to show solidarity to BLM.

If you didn’t. do it, you were a “white supremacist” according to these 19-year-old unemployed sh*theads.

Onee couple refused, and. the mob turned on them in an ugly way.

I posted two videos for you. One incident happened in D.C. and the other one I am not sure where it went down.

You can watch the videos below:

That woman has courage. Good for her. Stand up to the insanity.

These communists are emboldened right now. Just imagine how they’ll feel if Joe Biden were to win the White House. They would feel as if they have a mandate from the American people to “take over” and they’d begin moving into towns and cities all over the U.S., including Red cities and towns.

Vote as if you’re saving your life from treachery and communism because you actually are.