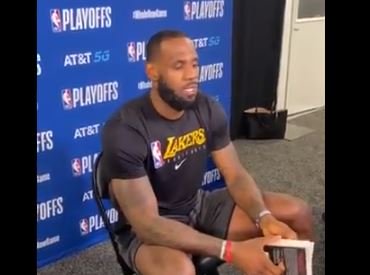 Over the weekend, professional athletes and sports writers ratcheted up debate over the social justice movement currently straining sports’ place in the American culture. On the left, LeBron James and USA Today writer Jarrett Bell defended social justice protest, and on the right, ultimate fighter Colby Covington and Outkick’s Jason Whitlock ridiculed it. James made a vain effort to claim that the voice of African Americans is being muted. In a USA Today story by Mark Medina, he’s quoted as saying, “We’ve seen our voices be muted our whole lives.” This statement comes from a man who is the most recognized, most quoted athlete and social justice warrior in the world. James is a media darling and his Tweets get regular places in the news cycle. He also owns the Spring Hill media company, which he’s built into a $ 100 million empire. If he thinks all these things are the workings of a “muted” voice, he’s delusional. Ultimate fighter Colby Covington tore into woke rival Tyron Woodley in a Las Vegas ring Saturday and blasted James outside the ring. Covington (seen in above photo) defeated Woodley, who wore a red “Make Racists Catch The Fade Again” hat to the pre-fight press conference, in a five-round technical knockout. Covington called Woodley a “domestic terrorist sympathizer.”  After the fight, President Donald Trump phoned Covington to congratulate him on the victory. In the press conference, Covington said, “If you thought that was a beating, wait until November 3 when Donald Trump gets his hands on Sleepy Joe. That’s gonna be a landslide. I want to dedicate this fight to all the first responders. All the military out there. This world wouldn’t be safe without you guys. “You keep us safe, not these woke athletes. I’m sick of these woke athletes and these spineless cowards like LeBron James.” Meanwhile, USA Today’s Bell wrote a story over the weekend declaring the NFL stage “an ideal place to make a social statement” and urged people to ignore the backlash: “The NFL, flowing with a broader national sentiment in recent months, is demonstrating some of the support for its players that it should have years ago when Kaepernick ignited an awareness switch in 2016.” Bell concludes his defense of athlete protest by saying there are many reasons for players to kneel. “Especially when they have our attention. Whether you like it or not.” Whitlock’s weekend blog not only deflected Bell’s woke piece, but also indicted the icons of the social justice movement as money grubbers capitalizing on criminals who died in altercations with police officers. Whitlock wrote, “let me take the first crack at defining the history being forged by Black Lives Matter, Colin Kaepernick, Lebron James, Nike and their media sycophants. They’ve created the Criminal$ Justice Movement.” The intense fight for the rights of criminal suspects resisting arrest is “just a cash grab by Democratic politicians, Nike and athletes, celebrities and journalists seeking social media influence,” Whitlock contended. They’re cashing in on black tragedies, and their calls to defund the police are emboldening criminals: “Everybody is using George Floyd’s death to make it rain. His memory is used to hype NFL and NBA games, power ad campaigns for podcasts and YouTube shows, leverage media members for promotions and, most importantly, fuel left-wing political funding.” Justice is the claim, but cash and power are the real goals, Whitlock concluded. , Newsbusters – Welcome to NewsBusters, a project of the Media Research Center (MRC), America’s leading media watchdog in documenting, exposing reports