Watch As Senator Ted Cruz Destroys James Comey: “You’re either deliberately corrupt or willfully incompetent… And I do not believe you are incompetent” 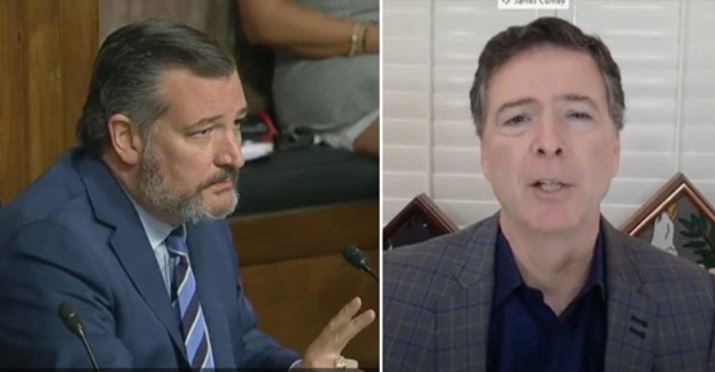 OPINION by Patty McMurray at 100 Percent FED Up –

The disgraced former FBI Director James Comey is getting his hat handed to him today, during his embarrassing testimony before the Senate Judiciary Committee.

The hearing with the fired FBI Director James Comey, that was finally called by Chairman of the Committee Sen. Lindsey Graham (R-SC), was long overdue.

take our poll – story continues below

Sara Carter reports – The hearing, Graham has said, was to gain clarity of the FBI’s decision making in the early days of the probe. Moreover, he said they would be questioning the inaccuracies in the bureau’s FISA court filings, the secret court that grants or denies the bureau warrants to spy on Americans.

The weaponization of the nation’s most trusted agencies and the warrants used to monitor a political opponent by Democrats violated the very rights our founding fathers established when the American republic was founded.

What happened to Carter Page, a Trump campaign volunteer, and what happened to President Donald Trump should never happen again. The FBI appears to have relied on false Russian disinformation planted in an ex British spy’s debunked dossier. Further, evidence sheds light on the fact that senior members of the FBI actually knew this all along.

In the first clip, Senator Lindsey Graham can be seen asking Comey if the FISA court should have been informed that Carter Page was working with the CIA before pursuing FISA applications to be used against him? Comey snapped back, saying he doesn’t agree with Graham, saying he doesn’t believe he was a source for the CIA. Senator Graham reminded Comey that have an email confirming that he was a source for the CIA. Graham blasted Comey for being the director of the FBI, yet seemingly, he didn’t know what was going on in the investigation he was in charge of.

Trending: REMEMBER THESE NAMES: 3 Top Republicans Announce They Will Not Be Voting For Trump’s Reelection

Senator Mike Lee (R-UT) also blasted to Comey, explaining how he has turned out to be a dishonest disappointment.

“Before you were confirmed, you claimed the rule of law mattered. You promised you would always dot the i’s and cross the t’s. I trusted you. You gave me your word. And yet you sit in front of us today and claim to know nothing about your own investigation.”

“How can you now as a private citizen and former FBI Director show up and then speculate freely regarding any alleged ties between President Putin and President Trump… You don’t seem to know ANYTHING about this investigation that you ran.” pic.twitter.com/fOnr4M2J2I

Senator Ted Cruz eviscerated Comey during his questioning of the former FBI director: “You’re either deliberately corrupt or willfully incompetent. And I do not believe you are incompetent.” Cruz continued, “This has done severe damage to the professionals and the honorable men and women at the FBI because law enforcement should not be used a political weapon. That is the legacy you’ve left.”

“This has done severe damage to the professionals and the honorable men and women at the FBI because law enforcement should not be used a political weapon. That is the legacy you’ve left.”
pic.twitter.com/E5Hu7OEwKf

Senator Josh Hawley (R-MO) makes no bones about it, he’s calling Comey a criminal and claims he should be treated as one.

Comey testified to me that he took no action to investigate CIA’s referral of potential wrongdoing by Clinton campaign, but DID get a wiretap of Trump campaign based on 1) false statements 2) from a Russian agent 3) and Democrat political operatives. This should be criminal.

Comey testified to me that he took no action to investigate CIA’s referral of potential wrongdoing by Clinton campaign, but DID get a wiretap of Trump campaign based on 1) false statements 2) from a Russian agent 3) and Democrat political operatives. This should be criminal

James Comey repeatedly tells the Senate Judiciary Committee that he can’t remember what happened during the investigation he was heading up, yet here he is, the former director of the FBI, asking Americans to contribute to his bank account by purchasing a copy of his memoir, “A Higher Loyalty.”

Comey’s testimony, in its entirety, can be seen here:

Investigative reporter Paul Sperry isn’t happy that the Senate Judiciary Committee is tasked with addressing this very serious issue of questioning the “slippery” former FBI director. Sperry mocks Comey for swearing he doesn’t remember anything about Christopher Steele’s sub source being the subject of an FBI investigation as a suspected Russian agent, or about his own CrossFire Hurricane team interviewing the Steele sub source in Jan. 2017.

BREAKING: Comey swears he doesn’t remember hearing anything about Steele’s primary subsource, Igor Danchenko, being the subject of an FBI C.I. investigation, as a suspected Russian agent, and doesn’t recall his own CrossFire Hurricane team interviewing Danchenko in Jan 2017

This scandal is too serious to have politicians questioning such a key witness as Comey under oath. He’s too slippery. A staff attorney with prosecutorial experience ought to be questioning Comey, pinning him down with documents, following up on his obfuscations and evasions

This article originally appeared at 100 Percent FED Up and was republished with permission.

*This article may not be reprinted without expressed permission from 100 Percent FED Up.