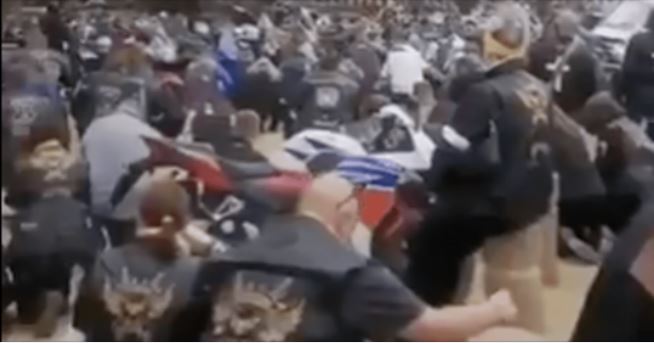 OPINION by Leisa Audette at 100 Percent FED Up –

A touching video of a large group of bikers has gone viral for its images of the prayer for President Trump and First Lady Melania Trump.

Americans are sending prayers and love to President Trump who has been tweeting out his appreciation:

take our poll – story continues below

The scene below of hundreds of bikers all kneeling to pray is incredible:

Last night, a group of supporters were surprised to see Chief of Staff Mark Meadows who came out of Walter Reed hospital to say that President Trump appreciates their support:

President Trump saw a gathering of supporters outside the Walter Reed Hospital tonight and sent his Chief of Staff Mark Meadows out to thank them.

Another video of the group of well-wishers:

The president sent a small token of thanks so the supporters:

Marine One picked up President Trump from the White House and brought him to Walter Reed Hospital where he will stay for a few days:

President Trump tested positive for the coronavirus, and now it’s all hands on deck to make sure he gets the best possible treatment.

The move was a precautionary measure recommended by the POTUS’s physician, officials said. He allegedly only has mild symptoms. President Trump has also been given the experimental Regeneron antibody cocktail as a precaution.

Marine One landed very close to the White House and not on the helipad. Speculation was all across the board about the peculiar landing by Marine One.

President Trump walked to Marine One:

President Trump walks out of the White House under his own power to Marine One before heading to Walter Reed, followed by Mark Meadows pic.twitter.com/Rve6Yqg1IH

It is being reported that President Trump will work from the Executive suite at Walter Reed for the “next few days.”

This article originally appeared at 100 Percent FED Up and was republished with permission.

*This article may not be reprinted without expressed permission from 100 Percent FED Up.

*Some edits and additions have been made.