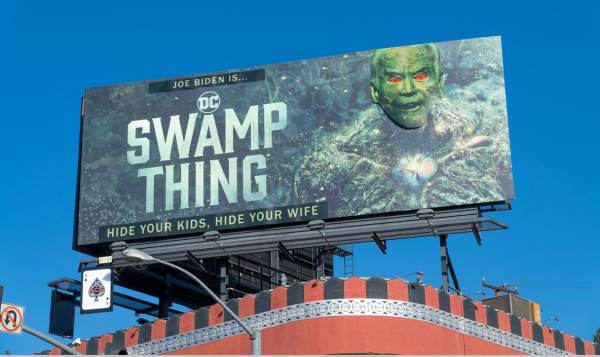 The right-wing street artist group The Faction has struck Hollywood once again, this time with a giant “Swamp Thing” billboard on Sunset Blvd.

The billboard now features former Vice President Joe Biden as the Swamp Thing, with the slogan “hide your kids, hide your wife.”

We have appointed ourselves as the new campaign team for @JoeBiden.

We forgot to tell him though. SHIT.

Oh well. Just let us know what you think of our billboard hack for Swampy Joe! #SwampThing #Biden2020 https://t.co/3OVqzugwE4

“It’s a signal to all of the war-weary citizens here behind enemy lines that they are not forgotten and that there are others like them here in Vichy California.”
~ @TheFaction1776 pic.twitter.com/ijzW8bJCzm

Why do we take over billboards in the middle of the night?

Wanna help us fight? Our PayPal link is in our profile. 🇺🇸 pic.twitter.com/SxEzKJMCrE

“The latest iteration of the DC comics franchise, features the reanimated corpse of the former VP. The science-worshippers in the underground labs of the Democrat party were experimenting with Socialism, when a terrible accident filled Joe’s rotting husk with vile ideas like the Green New Deal and Black Lives Matter. Then, with the aid of his elder-abusing wife and family, Old Joe came alive!” The Faction told the Gateway Pundit. “With your help (and vote), he can return to haunt the DC swamp for another 47 years or until AOC can pass her GED and take over!”

Right-wing street artists also recently put up a 70-foot “Trump” sign, in the style of the Hollywood sign, near the Getty Center in Los Angeles.

The group behind the Hollywood sign said in a statement provided to the Gateway Pundit that “the idea behind this was two-fold.” First, they said that it was a “psychological terror op designed to counter the psychological terror ops that the Democrat run government of California has been running on its citizenry since the lockdown.” Second, it is a sign to other Trump supporters “that there is hope.”

“By being on the 405, looming over Westwood and the Getty, we have taken our message right into the belly of the CA progressive beast,” the statement read. “It is a signal to all of the war weary citizens here behind enemy lines that they are not forgotten and that there is hope and others like them here in Vichy California.”