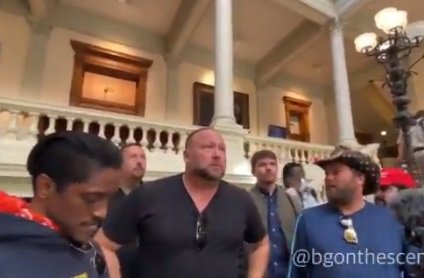 Alex Jones is currently leading a group of Trump supporters who have stormed the Georgia State Capitol to “Stop the Steal.”

Jones spoke outside prior to entering the building with Republican operative Ali Alexander and America First host Nick Fuentes.

TRENDING: WE CAUGHT THEM! Part 6: Michigan and Georgia, Like in PA and VA, Caught in SAME PATTERN! — Once Biden Gained Lead with MASSIVE Vote Dumps, The Remainder of Votes All Possessed Same Biden to Trump Vote Ratio – THIS IS IMPOSSIBLE!

“We’ve got to do whatever it takes. If we lose this, we’ve lost the Republic,” Alexander told the crowd inside the Capitol.

Inside the Georgia State Capitol now, with Alex Jones leading the group of Trump supporters as they file in past security #Atlanta #Georgia #Georgians pic.twitter.com/nQeYglgRQC

As Gateway Pundit previously reported, attorney Lin Wood said he has irrefutable evidence that Georgia local election officials were instructed by the state to report original vote totals and NOT report recount totals which are different.

So far three Georgia counties have found ‘missing’ votes for President Trump in the statewide recount.