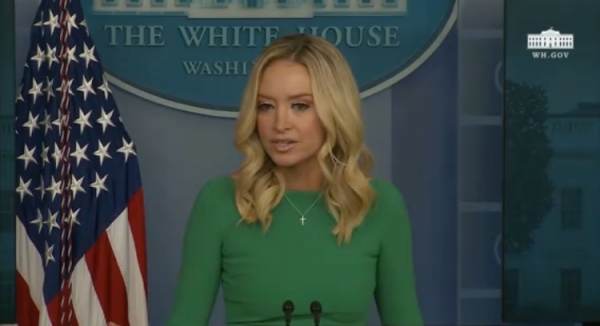 Yes, Kayleigh is a tough cookie, there’s no doubt about that, but what she just did to CNN’s Kaitlin Collins was so savage and such a brutal blow, that I just had to bring this to you.

During a presser today, where Kayleigh discussed the COVID vaccine and shut down the lying fake news media, she went a step further and crushed one of the most mouthy, disrespectful, and hypocritical WH reporters (next to Jim Acosta) of all time.

Collins was attempting to get a question in as Kayleigh was leaving…but instead of just walking away, and allow Collins to rudely keep hollering, Kayleigh leaned down into the mic and said these very true 5-little words:

“I don’t call on activists.”

Jimmy Kimmel
Samantha Bee
Stephen Colbert
Seth Meyers
Trevor Noah
By completing the poll, you agree to receive emails from WayneDupree.com and that you’ve read and agree to our privacy policy and legal statement.

Boom! That’s exactly right, and exactly what these so-called “reporters” are. They’re activists.

As a matter of fact, these “activists” actually sounded exactly like ANTFA and BLM yesterday, during a presser with VP Mike Pence. You won’t believe how they were screaming and shouting.

RELATED: [VIDEO] WH Press Behave Like Angry Far-Left Mob, Getting Out of Their Chairs, Screaming and Yelling Wildly at VP Pence

But look, while CNN is awful, I am telling you, Fox News is 10000X worse. They are the real enemy – CNN and MSNBC are just a laughable sideshow.

If you want to show Fox News who’s boss here’s what you can do:

Don’t watch anything, not even “friendly” shows on Fox News. Turn them off.
If you want to watch your favorite shows, watch them on Youtube or social media (not Fox’s Youtube channel).
Do not click on ANY Fox News or New York Post article at all.
Cancel all subscriptions you may have to any Fox News app or program they offer.
Block Fox News on social media do not retweet them or promote them.
If you’re looking for broadcast alternatives, go with OANN or Newsmax.

If we follow these five steps, we will send a very clear and very powerful message to these traitors and to Paul Ryan, that they can’t use us for our ratings and loyalty, and then sail us down the river later.

There’s no good reason to be rewarding and paying the people who are actively destroying our movement. Cut the cord and purge those vultures from your life.