WATCH: Bombshell Video Shows Suitcases Filled With Ballots Pulled From Under a Table in Georgia 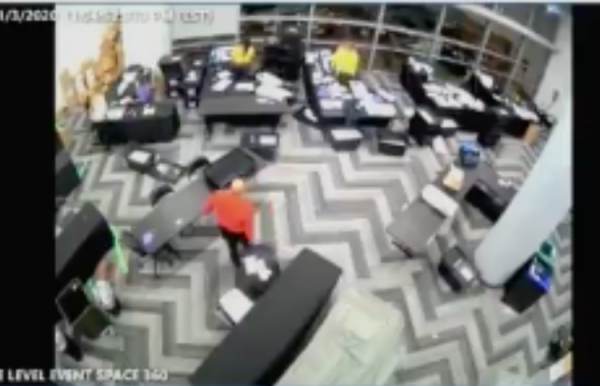 Team Trump just shared a video of suitcases filled with ballots being pulled out from under a table AFTER supervisors told poll workers to leave the room.

But that didn’t happen…four people stayed behind and continued counting votes.

How much more “non-evidence” (🙄) like this do we have to see before something is done? this is ridiculous.

The steal is literally happening before our eyes and nobody cares.

How do you get most of your news?

Social media
TV
Podcast
Newspaper
By completing the poll, you agree to receive emails from WayneDupree.com and that you’ve read and agree to our privacy policy and legal statement.

This should be enough for Kemp to demand an audit of the signatures, and if he doesn’t, he’s part of the coup.

WATCH: Video footage from Georgia shows suitcases filled with ballots pulled from under a table AFTER supervisors told poll workers to leave room and 4 people stayed behind to keep counting votes pic.twitter.com/AcbTI1pxn4

Going quietly into the night, while Dems and the media jackals (led by Fox News) complete their steal, isn’t an option.

That’s why President Trump and his team are currently fighting their butts off.

And we need to stay the course, hold the line, and keep fighting.

This election will likely go to the SCOTUS and I believe we’ll win.

We didn’t fight this hard for 5 years to roll over when the Deep State strikes the hardest.