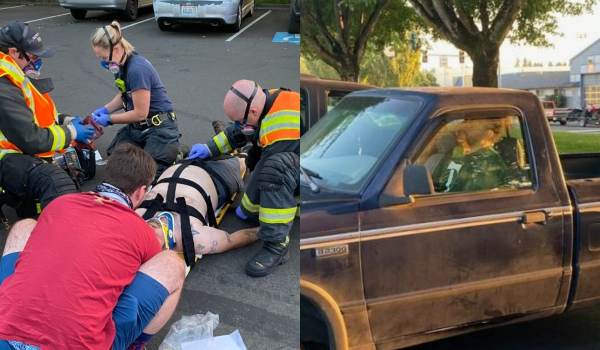 Prosecutors have declined to file charges against a Vancouver Black Lives Matter militant who followed the Proud Boys to a bar following a memorial for the Patriot Prayer member who had been murdered by Antifa in Portland — and ran over one of them with his vehicle.

The victim, Shane Moon, as well as other witnesses, say that it was a targeted attack due to his political beliefs. He was placed in intensive following the attack, as he was bleeding from his brain, sustained damaged to his left temporal lobe, has a concussion and could not remember the impact.

“Court records filed Dec. 11 in Clark County Superior Court, show Charles R. Holliday-Smith, 30, was exonerated, pending further investigation. His bail of $100,000, which had already been posted, was also exonerated,” The Columbian reports. “No charges were officially filed against Holliday-Smith, who’s also known as Robbie Smith, who had been accused of first-degree assault and hit-and-run resulting in injury.”

The Gateway Pundit has obtained the email sent to inform the victim that they would be exonerating the attacker.

As Gateway Pundit previously reported, Moon had just attended a memorial for the man who was murdered by Antifa member Michael Forest Reinoehl in August when he was hit.

Following the memorial, Moon and a group of his friends and Proud Boys went to a local bar down the street called Charlie’s. According to Proud Boys Chairman Enrique Tarrio, a man who appeared to be a member of Antifa was also at the bar and began taking photos and recordings of the people inside.

Rex Fergus, who witnessed the incident, told the Gateway Pundit that the man “started walking around the bar and recording us, putting his phone in our faces, supposedly for doxing.”

“As he was doing that, one of our guys confronted him and said ‘hey, get out of here, we don’t want you filming us. This is a private establishment and we’re not in public.’ The man continued to try to pick fights with people in the bar at the time, until security finally kicked him out of the bar,” Fergus said.

As the man was kicked out of the bar, there were several Proud Boys in the parking lot smoking cigarettes and just arriving from the memorial service. Fergus explained that the man had also become combative with them.

“Once the guy started his vehicle up and started to drive off, he hit Shane,” Fergus said. “Shane tried to get out of the way and the guy ran him over.”

Fergus said that Shane’s body went up on to the roof of the truck and his head hit the concrete when he fell.

“Immediately he was unconscious. After he hit him, the driver of the truck gassed it and left the parking lot, leaving Shane on the ground, bleeding out of his ears,” Fergus said.

“We immediately ran over and start doing everything we could to stabilize him. He was not conscious, but he was breathing,” Fergus said. “Blood was pouring out of his ears and his nose. His eyes were completely bloodshot.”

Luckily, a surgeon happened to be at the bar and helped them get control of the situation until the paramedics arrived.

For weeks, the Vancouver Police Department refused to provide the victim or witnesses with any information about whether or not the attacker was in custody, or even a name of the suspect.