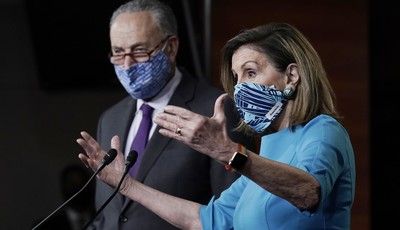 Speaker of the House Nancy Pelosi (D-Calif.) speaks during a press conference on Capitol Hill in Washington, on Dec. 20, 2020. (Tasos Katopodis/Getty Images)

House Speaker Nancy Pelosi (D-Calif.) attempted to put pressure on Republicans in the Senate and House in accepting President Donald Trump’s request to add $2,000 stimulus payments to the package he is threatening to veto.

“If the President truly wants to join us in $2,000 payments, he should call upon Leader McCarthy to agree to our Unanimous Consent request,” Pelosi said in a statement on Wednesday. “We are scheduled to go in for a pro forma session [Thursday, Christmas Eve] at 9:00 a.m. We are awaiting word from Leader Hoyer as to whether Leader McCarthy will agree to or reject our Unanimous Consent request.” She was referring to House Minority Leader Kevin McCarthy (R-Calif.) and Democratic Majority Leader Steny Hoyer (D-Md.).

On Tuesday night, Trump lambasted the $900 billion stimulus package—which was tied to a massive omnibus spending measure—that included $600 direct payments, saying they should receive at last $2,000 payments. The president also made note of the bill’s foreign aid funding, funding to the Smithsonian and Kennedy Center, and other projects.

After Trump threatened to veto the measure, Pelosi and other Democrats said they would support his call for $2,000 payments. Senate Minority Leader Chuck Schumer (D-N.Y.) said he also agreed with Pelosi’s move to add the $2,000 payments.

Trump also called on lawmakers to remove what he termed as “wasteful items” and “unnecessary.”

“I am asking Congress to amend this bill and increase the ridiculously low $600 to $2,000, or $4,000 for a couple,” he remarked. “Congress found plenty of money for foreign countries, lobbyists, and special interests,” the president added. “While sending the bare minimum to the American people who need it.”

“It wasn’t their fault; it was China’s fault.”

“The entire country knows that it is urgent for the President to sign this bill, both to provide the coronavirus relief and to keep government open,” Pelosi wrote to Democrats on Tuesday. “Let us pray!”

Trump’s video came as a number of lawmakers griped that they didn’t have enough time to look through the approximately 5,500-page bill (pdf).

Members of Congress have to take action bet Dec. 28, as that is when a temporary funding measure is slated to expire.

The stimulus package measure isn’t the only one Trump has threatened to veto in recent days. He said he would veto the recently passed defense spending bill because it doesn’t include a repeal of Section 230 of the Communications Decency Act, which serves as a liability shield for social media companies.