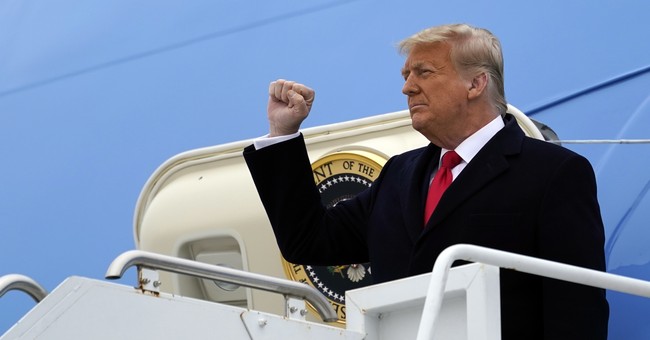 While for many January 20th will be solemn day when Trump officially leaves the White House, many can also rest assured that he will definitely go out with a bang.

According to reports, President Trump is set to receive a red carpet send-off, with a 21-gun salute and military band.

Pretty ironic send-off considering that liberals thought at one time that the military would have to drag him out of the White House.

But Trump is not expected to simply fly away quietly.

A red carpet, color guard, military band and 21-gun salute are all possible elements of the send-off being planned for Trump’s final flight as president, the AP reported, citing what it said was “a person familiar with the planning who spoke on condition of anonymity.”

CNN reported that an event for Trump could be held at the White House prior to his departure, at Joint Base Andrews, or in Florida, where Trump’s arrival is being timed to ensure that he lands as president.

It is unclear if Trump will make public remarks on Wednesday.

Trump had said he would not attend Biden’s inauguration, which prompted Biden to say it was “one of the few things he and I ever agreed on,” according to USA Today.

Trump has issued a few comments in recent days.

On Wednesday, Trump issued a statementregarding his military legacy.

“United States military troops in Afghanistan are at a 19-year low. Likewise, Iraq and Syria are also at the lowest point in many years. I will always be committed to stopping the endless wars. It has been a great honor to rebuild our military and support our brave men and women in uniform. $2.5 trillion invested, including in beautiful new equipment — all made in the U.S.A.,” Trump said.

Urgent: Do you approve of Pres. Trump? Vote Here in Poll

Now that’s how you leave D.C!

It’ll be quite a stark contrast to Biden’s virtual inauguration and his 25,000 troops outside of the White House.

Notice the stark contrast between the two…

One is being honored by our military, while the other is being guarded.