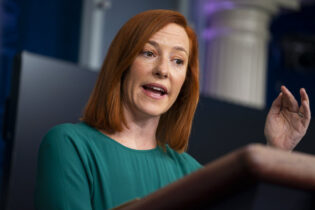 Joe Biden’s press secretary and Obama holdover is a mess.

This young woman isn’t ready for primetime and she’s getting eaten alive up there at the podium.

Steve Doocy is like right-wing “Jim Acosta,” only with good questions, and it’s making Jen’s life a living hell.

But it’s not just the questions that are getting to her. Jen doesn’t appear to have command of the English language.

Do you believe Justice Roberts is compromised?

Yes, the Dems have got something on him
No, I think he’s just a cruddy globalist
By completing the poll, you agree to receive emails from WayneDupree.com and that you’ve read and agree to our privacy policy and legal statement.

This girl is making rookie mistakes everywhere and is getting ruthlessly mocked for it…rightfully so, look what the left did to Kayleigh – who is a Harvard grad and always came thoroughly prepared.

But it was Newsmax reporter Emerald Robinson who really threw Jen into a tizzy with a question about China.

Biden has canceled President Trump’s EO keeping China out of our power grid, and Emerald wanted to know why.

Jen didn’t have an answer, and she stuttered, stammered, and hemmed and hawed before finally admitting “I’ll have to check and get back with you.”

Ghastly. What a mess.

Good on WH @PressSec @JRPsaki for calling on @Newsmax‘s @EmeraldRobinson during today’s briefing, who then asked about an executive order as it relates to China and the U.S. power grid.

Watch for Psaki’s fellow lefties to demand she never call on Emerald again in 3, 2, 1…. pic.twitter.com/DSVyWmapKy

You’d think Team Biden would be better prepared since they probably knew by October that they’d be “winning” the election.

Just goes to show, all that DC pomp and circumstance that was heaped on Obama and his subpar admin was just a smokescreen to cover up a bunch of ill-equipped, ignorant ninnies.

Things will be different this time around – they won’t get a pass like Obama’s team did – every one of these swampers will be placed under a spotlight and critiqued and called out for every single thing they say and do.

Welcome to our resistance, enjoy your stay.