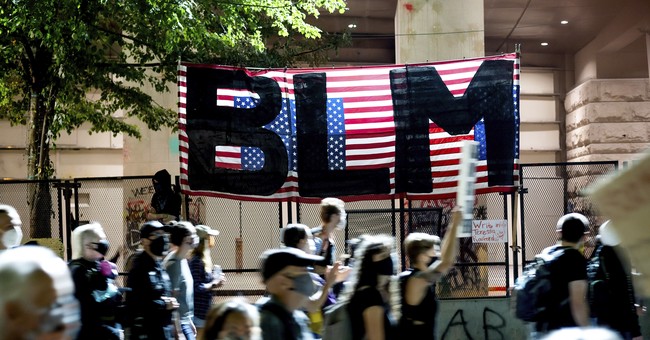 There’s no question that Joe Biden and the Democrats fully embraced Black Lives Matter, both the group and the radical movement.

Kamala Harris and thirteen Biden campaign staffers donated to a bail fund that was helping get out people arrested during the riots in Minneapolis last year.

The Democrats even had a strange BLM-inspired musical number at their national convention last summer.

For a long time, Biden refused to concede the “protests” were violent until polls showed that Americans were troubled by the Democrats’ failure to recognize the violence or do anything about it. It was only after the polls came out, that Biden began acknowledging the violence. But even then, he condemned “violence” or “extremism,” he has never condemned the BLM or Antifa by name. Indeed he’s not even acknowledged that Antifa is even real, calling it “just an idea.”

Most of the violence has occurred in Democratic cities, with Democratic politicians who have often not adequately addressed it, like Portland, where the violent actors have not been held to account and have gotten away with so much. They have a progressive district attorney who hasn’t moved to prosecute a lot of the offenses.

So now it’s rather fascinating that the BLM just took some potshots at Joe Biden in a Twitter thread that was urging “demilitarization” of the police.

Biden is currently sending more military equipment to our neighborhoods than Trump did. You read that right. Our communities are being terrorized at a greater rate than they had been under Trump.

“Biden is currently sending more military equipment to our neighborhoods than Trump did,” they tweeted. “You read that right. Our communities are being terrorized at a greater rate than they had been under Trump.”

They’re claiming communities were treated better under Trump. While that’s certainly true, but it’s a stunning that they’d say it and such slap on Biden who has been so embraced him during his campaign. It’s hilarious too, given how much cover Democrats have given them.

So what does this all mean? They think they have so much power at this point they can flame Biden and move him even further left? It sounds like it and they may be right. We saw Biden crumble like a cheap suit on his refugee cap stand when pressed by those on the left. They may believe they can manhandle him over this as well.