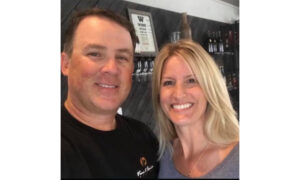 A wine bar owner in Santa Barbara County is facing four criminal charges for keeping his business open during the state’s pandemic restrictions, making him one of the few business owners in California formally charged by the state for defying Gov. Gavin Newsom’s stay-at-home orders.

Kurt Hixenbaugh, 49, and his wife, Dawn, have owned Vino et Amicis in Old Town Orcutt since 2018. He is a former police officer with the San Luis Obispo Police Department, and a U.S. Army veteran with no previous criminal record.

Hixenbaugh says he was having a drink in his bar after hours while interviewing a potential employee last August when three undercover agents from the California Department of Alcoholic Beverage Control (ABC) came in. They then cited him for allegedly serving alcohol indoors, which was against public health orders at the time.

“I said, ‘Business has been hard lately with the pandemic, we’re just trying to get by,’ and I said, ‘I didn’t know having a beer in my own bar after I was closed was a violation,’” Hixenbaugh told The Epoch Times.

Hixenbaugh said he filed a complaint with the ABC after the August visit, which he said became increasingly confrontational due to the unreasonable nature of the agents. He speculated that the criminal charges against him were made in retaliation.

California Assemblyman Jordan Cunningham (R-San Luis Obispo), who has been a practicing attorney for 16 years, is representing Hixenbaugh in the case.

“I’ve been doing predominantly criminal law, both as a prosecutor and defense [on the] private side for 11 years, [and] I’ve never seen anything like this,” Cunningham told The Epoch Times.

At an April 29 arraignment, Cunningham formally requested to file a demurrer—a document which mounts an objection that an opponent’s position is irrelevant or invalid. Superior Court Judge Gustavo Lavayen agreed to the filing, then pushed the arraignment to June 15.

Based on the demurrer, the judge could dismiss the case. If not, Cunningham said he will “argue the constitutionality and the code section ambiguity before the court.”

Hixenbaugh said he continued to keep his establishment open—even after he was fined $3,000 by the ABC—out of fear it would not survive, if outdoor dining was closed completely during the winter stay-at-home orders.

“I’m all about following the rules and following the laws, and doing things the right way. We have never broken any ABC rules or ABC laws, never once since the day we’ve opened. … We never have, and we never will,” said the former police officer.

“What this is about with me is principle. … They became this just overreaching monster that came in to harass me for something that wasn’t illegal, and then want to levy a fine against me and then want to prosecute me criminally.”

John Carr, a spokesperson for the ABC, told The Epoch Times that the department visited the wine bar and “witnessed health order violations” last Dec. 11 and again in January.

“The department found a health order violation at Vinos et Amicis Wine Bar in Orcutt after receiving complaints in December, 2020 that on-site operations were occurring at a time when they were not allowed,” he said via email.

A completed report was submitted to the Santa Barbara County District Attorney’s Office on Feb. 11, he said.

“ABC has preferred voluntary compliance with health orders but has enforced the following violations when locations were not cooperative: Businesses that allowed on-site dining/alcohol consumption in those counties where it was not allowed; employers that were not requiring their employees to wear face coverings,” Carr stated.

If convicted on all four counts, Hixenbaugh could face a maximum sentence of six months in jail or additional fines.