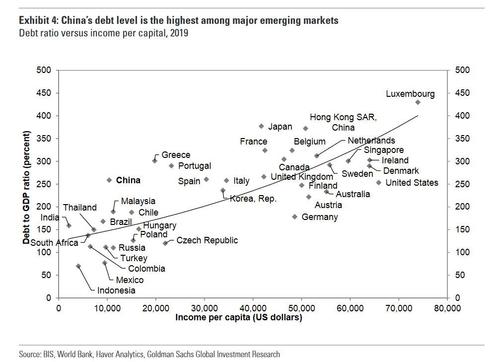 Almost three months after markets stumbled when after China’s top banking regulator said he’s "very worried" about risks emerging from bubbles in global financial markets (and China's property sector) sparking concerns about further tightening in the world’s second-biggest economy and slamming risk assets, China has done it again and on Saturday Liang Tao, vice chairman of China Banking and Insurance Regulatory Commission, said at the International Finance Forum in Beijing that recent interest rate hikes by emerging economies could lead to a bursting of global financial asset bubbles which have been made even bigger by unprecedented pandemic easing measures by developed countries (i.e., Biden's trillions). And just in case it wasn't clear whose fault this is, Tao added that developed countries are sticking with ultra-low rates even as emerging economies raised their borrowing costs, "potentially resulting in the re-pricing of global assets."

In short, China is already pre-emptively pointing the finger at the US and western central banks as the parties responsible not only for bursting the biggest asset bubble in history, but for creating it in the first place.

Tao's comments are almost a verbatim repeat of what his boss, Guo Shuqing, chairman of the China Banking and Insurance Regulatory Commission, said during a briefing back on March 1 when he said he’s “very worried” about risks emerging from bubbles in global financial markets and the nation’s property sector. Again blaming everyone but China, Guo said that bubbles in U.S. and European markets could burst because their rallies are heading in the opposite direction of their underlying economies and will have to face corrections “sooner or later."

So what is the solution? None really: instead, the Chinese regulator suggested that all countries should take a page out of China's totalitarian and centrally-planned playbook and that countries should coordinate financial regulation and improve the monitoring of cross-border fund flows, while emerging markets must prevent risks from large movements of the so-called hot money. He also said that organizations such as the IMF, the World Bank and the WTO should better represent developing countries (but China's subsidiary known as the World Health Organization?). As if every emerging market has a capital firewall like China which can be shut down at a moment's notice.

The official also said China – whose debt has absolutely exploded in the past year – has managed risks from new hidden local government debt, and contained bubble risks in property finance. He also claimed – erroneously – that financial sector leverage has declined, while a disorderly expansion of capital has been corrected. Neither is true… … with China’s debt level the highest among major emerging markets… Which means that if anyone is looking for the deflationary catalyst that tips the global financial system into contraction – now that all developed central banks are primed to print metric tons of digital money in order to flood the world with inflation – and crashes the stock market, look no further than China.