Stop Emasculating Men, Then Wondering Where All The Good Men Went 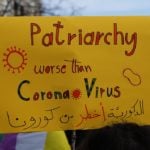 “Hell hath no fury like a woman scorned.” This famous line from English playwright William Congreve’s 1697 tragedy “The Mourning Bride” still elicits laughs and nods among both sexes, acknowledging women can be just as cruel, vindictive, and destructive as any man without as much as a raised voice, let alone a raised finger.

Yet when a man is attacked with unsupported allegations, how many run to the tiresome delusion that all men are “toxic,” and echo that we must reflexively “believe all women”?

Women Are Human Too — With Human Flaws

As a society, we buy into an unspoken and pervasive bias in favor of women: as the fairer sex, they must be inherently more righteous and loving than men. Yet we are all human, and capable of being slaves to base passions. Just as men’s, women’s passions can manifest in destructive and ugly ways.

Recognizing this doesn’t negate the plight women have endured in a historically male-dominated world. It simply suggests women hold no monopoly on virtue.

Women’s ascendance past centuries-old barriers is remarkable and praiseworthy. Almost all the men I know look with pride and amazement at the mothers and daughters in their lives, and understand the “Me Too” movement is a long-overdue reckoning for bad men. But why must success for one sex automatically include derision for the other?

The laudable, original objective of the feminist movement urging us to better our traditional manhood has warped into an assault on everything masculine. It strips away empathy for boys, who must navigate a world that assumes the worst of them.

The corporate media response to COVID-19 is one example of our society’s sex bias. Barely a month into the global health crisis, dozens of articles opined that women were the “true victims” of COVID-19, even when close to 60 percent of the virus’s victims were men in the United States and up to 78 percent were in countries like Malaysia.

The rush of “reporting” noted women, already burdened with the domestic tasks of parenting, housework, and “emotional labor,” were concurrently fighting on the front lines as nurses, waitstaff, and maids. Where were the mentions of the equally essential roles dominated by men like doctors, truck drivers, police officers, and sanitation workers?

If nearly six out of ten was not a high enough proportion of COVID deaths to dispel the media narrative, what percentage could have? More than 69 percent of the unsheltered homeless were men as of 2018. Workplace fatalities kill about 10 times more men than women.

Men kill themselves at a rate almost 400 percent higher than women. They also make up the vast majority of combat deaths; more than 97 percent of American military fatalities in Operations Iraqi Freedom and Enduring Freedom were men.

The term “toxic masculinity” has become a household phrase, and identifying and culling “toxic” men a national pastime. What is toxic masculinity, exactly? It preaches that culture socializes boys to adopt negative psychological states and behaviors that hurt themselves, women, and society. Traditional behaviors once seen as virtuous are recast as the opposite.

“Toxically” masculine boys are apparently encouraged by fathers and mentors to keep their feelings bottled up, to be stoic, and never to “cry like a baby.” These damaging, stereotypical male roles allegedly produce emotionally stunted boys, who become toxic men, which leads to antisocial behavior and often violence that affects women most.

The quick ascendence of this concept to cultural gospel is reflected by how common the phrase has become. Although The New York Times has since removed its calculator for word frequency in its coverage, screenshots posted to Twitter suggest the term “toxic masculinity” was basically nonexistent in the media until recently. After that, its prevalence appears on the graph as a slope verging on vertical.

The same is true for related terms like “patriarchy” and “male privilege.” A Google search for the term “toxic masculinity” yields more than 7.5 million results. Start scrolling, and you’ll see articles like The New York Times’ “The Boys Are Not All Right,” Scientific American’s “How to Fight Toxic Masculinity,” and The Atlantic’s “Toxic Masculinity and the Brokenness of Boyhood” — which appears to have been stealth-edited with the new title, “The Miseducation of the American Boy.”

The “toxic masculinity” narrative deepened further in 2019, when the American Psychological Association, for the first time in its history, developed official guidelines for working with men and boys. The document is discouraging, calling for recognition of “the impact of power, privilege, and sexism on the development of boys and men” and casting what it considers “traditional” male behavior as inherently problematic.

The guidelines are intended to address some real challenges that disproportionately affect men, like loneliness and violent behavior. However, they look at all male behavior through a biased, negative lens and present theory as established fact. Risk-taking and stoicism, for example, are only judged by their potential pitfalls, not merits.

Where Is the Empathy For Men?

It’s debated whether certain masculine behaviors are born of dubious socialization or are the function of natural, hormone-driven biological traits. Meanwhile, many of the people shouting about toxic men also inexplicably claim there are no differences between the sexes.

The idea that men can only redeem their fundamental brokenness by acting more like women is not limited to the gated community of elite academia. It permeates the nation’s mainstream reading lists.

Just one example from late 2019 was the book “For the Love of Men” by Liz Plank. On the very first page, we are told toxic masculinity is more dangerous than nuclear war, followed by chapter after chapter of dodgy research in which toxic masculinity is essentially defined as any behavior Plank doesn’t like.

Where is the empathy for men? The question doesn’t require us to disregard women’s historical suffering. Rather, it simply acknowledges most men are neither predators nor abusers, and asks the same empathy and sympathy for men that our feminist society demands for women.