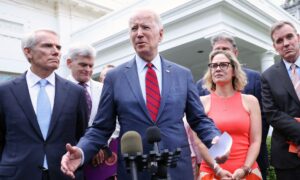 Republicans in Congress have warned they may pull their support for a bipartisan infrastructure framework after President Joe Biden said he would refuse to sign the final bill unless the Senate approves another measure funding what Democrats call “human infrastructure.”

After Biden announced on Thursday that he, along with five Democratic and five Republican senators, had hammered out the contours of a $1.2 trillion bipartisan infrastructure package, the president hours later said he would only put his signature on the final version of the bill if senators also approve his proposed $1.8 trillion American Families Plan and $2.3 trillion American Jobs Plan as part of a separate budget reconciliation process.

“I expect that in the coming months this summer, before the fiscal year is over, that we will have voted on this bill, the infrastructure bill, as well as voted on the budget resolution,” Biden told reporters on Thursday. “But if only one comes to me, I’m not signing it. It’s in tandem.”

Biden’s remarks came after House Speaker Nancy Pelosi (D-Calif.) said earlier on Thursday that her chamber would not vote on the infrastructure package unless the Senate passes the second reconciliation bill, which includes spending on climate change, Medicare expansion, and more of the Democratic Party’s progressive priorities.

Some Republicans in Congress, including Senate Minority Leader Mitch McConnell (R-Ky.), objected to linking the two bills together, accusing Biden of negotiating in bad faith.

“Less than two hours after publicly commending our colleagues and actually endorsing the bipartisan agreement, the president took the extraordinary step of threatening to veto it. It was a tale of two press conferences,” McConnell said on the Senate floor on Thursday.

“It almost makes your head spin,” McConnell said. “An expression of bipartisanship and then an ultimatum on behalf of your left-wing base.”

“I have no doubt that the president is under enormous pressure from some on the left to deliver a laundry list of radical climate demands,” McConnell added.

Sen. Lindsey Graham (R-S.C.) suggested on Friday that he would refuse to back the bipartisan infrastructure deal if it hinges on the adoption of other Democrat spending priorities.

“No deal by extortion!” Graham said in a tweet. “It was never suggested to me during these negotiations that President Biden was holding hostage the bipartisan infrastructure proposal unless a liberal reconciliation package was also passed.”

“If reports are accurate that President Biden is refusing to sign a bipartisan deal unless reconciliation is also passed, that would be the ultimate deal breaker for me,” Graham said in a separate tweet.

An aide for Sen. Jerry Moran (R-Kan.) told Bloomberg News that the Republican senator was wavering on his support for the bipartisan package following Biden’s remarks.

“You have all heard the president say multiple times publicly that he wanted to move these bills forward in parallel paths, and that’s exactly what’s happening,” Psaki. “That hasn’t been a secret, he hasn’t said it quietly. He hasn’t even whispered it. He said it very much aloud.”

The White House on Friday issued a readout of a call between Biden and Sen. Krysten Sinema (D-Ariz.), one of the five Democrats who negotiated the bipartisan infrastructure framework, saying Biden “reiterated strong support for both the Bipartisan Infrastructure bill and a reconciliation bill containing the American Families Plan moving forward on a two-track system.”