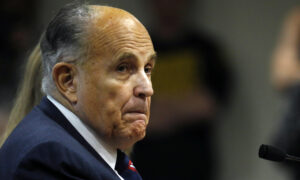 “The courts have long held that a lawyer is not entitled to the full protection of the First Amendment for statements made in court. That may be understandable because a lawyer has a special obligation to be candid with judges and jurors,” he wrote in an opinion article published Monday, days after the New York state Supreme Court suspended Giuliani’s law license over statements he made following the 2020 election.

Dershowitz, however, said he’s not aware of any compelling arguments for denying anyone, including a lawyer, of the First Amendment’s protection “when he or she participates in the marketplace of ideas on television, podcasts, or other media, even when representing a client.”

“Any statements made in such a public context can be rebutted in the marketplace of ideas, and so the public needs no special protection from statements made by lawyers,” he contended. “This is especially true when the statements concern important and controversial political events like an election.”

The court on June 24 ruled that because Giuliani made “false and misleading” comments while he represented former President Donald Trump’s campaign, it concluded that the “respondent’s conduct immediately threatens the public interest and warrants interim suspension from the practice of law, pending further proceedings before the Attorney Grievance Committee.”

The court order stipulated that the former New York City mayor’s suspension is temporary and is dependent on the outcoming of a pending hearing.

But Dershowitz, who is also a high-profile criminal lawyer, said that the court’s decision last week was based on vague reasoning.

“The rules under which Giuliani has been suspended are so vague that they cannot possibly satisfy the standards of due process, especially where public speech is concerned and clarity is required before it is suppressed,” he wrote in his opinion, published by The Hill. “If these rules were applied across the board fairly, and equitably, thousands of lawyers would be disbarred every year,” he added.

“I personally know of dozens of lawyers who seemingly have violated these rules. Lying and exaggeration are all too common in plea-bargaining, negotiations and soliciting clients. And yet these sins are never the basis for discipline against recidivating lawyers,” Dershowitz argued, claiming that the New York Supreme Court made Giuliani the “victim of selective suspension based on the political content of his public speech.”

Aside from the state Supreme Court’s ruling, Giuliani also could face a potential criminal investigation, after a federal judge appointed a special watchdog to review material that was recently seized from him. The watchdog, former federal Judge Barbara Jones, will determine what electronic files can be seen by prosecutors and what material should be exempt.

Palestinian Education Minister to kids: ‘There is no Israel, the entire land is ours, from the River to the Sea’