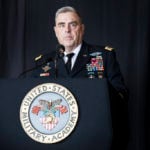 Former President Donald Trump called for Gen. Mark Milley’s resignation and criticized the general for kowtowing to leftist radicals in a statement Wednesday.

“Gen. Mark Milley’s greatest fear is upsetting the woke mob,” Trump said. “Gen. Milley ought to resign, and be replaced with someone who is actually willing to defend our Military from the Leftist Radicals who hate our Country and our Flag.”

In classic Trump fashion, the former president proceeded to elaborate upon Milley’s failures.

“When Black Lives Matter rioters were threatening to destroy Washington, D.C.,” Trump said, “[Milley] practically begged me not to send in the military to stop the riots.”

Trump said that Milley “later issued an embarrassing and groveling apology” for walking with him to St. John’s Church, which had been attacked by rioters the day prior. “Instead of denouncing the rioters, he denounced himself—a humiliation for our Military,” he said.

“A year later,” Trump continued, “even the Fake News had to admit that their Lafayette Square narrative was a giant lie. Milley, once again, looked like a fool.”

Last summer, legacy media figures and high-ranking Democrats erroneously claimed that Trump cleared Lafayette Square for a photo-op in front of St. John’s Church. New findings from an Inspector General report confirm this was a blatant lie. U.S. Park Police cleared the area for a contractor to install fencing, not for a presidential photo-op.

In an attempt to placate the president’s critics, Milley nonetheless apologized for accompanying Trump to the church.

Trump blasted Milley for “ingratiat[ing] himself with Biden, progressive Media, and the Radical Left,” with his recent defense of critical race theory.

Milley testified in a House Armed Services Committee hearing that he wants “to understand white rage, and I’m white.” During this same hearing, Milley added that he’s also “widely read” in Marxist literature.

“This Marxist, racist anti-American propaganda has no place in our military — I banned these training programs, now Biden and the Pentagon have resumed them,” Trump responded. “As soon as possible, Congress must defund this racist indoctrination.”

“General Milley’s record of achievements, such as they are, include episodes of profound blundering — a persistent misunderstanding of the national interest,” Domenech said. “And a dangerous willingness to politicize the army of the United States.”

Why Trump Should Fear DeSantis (or Someone Like Him)