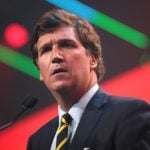 Vice News slammed Fox News’ Tucker Carlson for alleged hypocrisy on Wednesday because the conservative host advocated for cameras in classrooms to dissuade the use of race-based curriculum after calling foul on the National Security Agency for spying on him.

Not only is Vice’s accusation laughable, but it’s also a huge diversion from the alleged NSA spying situation the corrupt media has predictably neglected to cover honestly. More importantly, it’s a petty distraction from what the Tucker NSA ordeal signifies in context: a coordinated effort among Democrats, the media, and the deep state to demonize conservatives. Axios claimed to confirm through anonymous sources Wednesday in “Scoop: Tucker Carlson sought Putin interview at time of spying claim” that “the NSA is denying the targeting of Carlson but is not denying that his communications were incidentally collected.” Wow.

Like many other outlets and top pundits, however, Vice chose to brush off what was at the time the terrifying prospect of the NSA targeting U.S. citizens (and which has since been demonstrably true) to focus on tangential inanities: “Tucker Carlson: don’t spy on me. [A]lso Tucker Carlson: spy on teachers,” Vice tweeted, linking to an article about the Fox News host’s monologue on classroom cams. “Protection from government surveillance, however, apparently doesn’t extend to teachers or the classroom,” the article said.

But the Tucker NSA story is worth more attention than just a run-of-the-mill Vice opinion and a passing Twitter dunk. Paired with other important political context, it’s an apt case study in left-wing collusion. Several seemingly unrelated recent stories about domestic terrorism, emergency exceptions, “white rage,” and Carlson converge into a striking illustration of how the left successfully brands mainstream conservatives as racists and ideological extremists.

Rewind for a moment to the middle of last month, when President Joe Biden’s White House put out a “fact sheet” on “National Strategy for Countering Domestic Terrorism.” It noted that, on his first day in office, Biden had directed his national security team to focus on domestic terrorism, which the White House said is “the most urgent terrorism threat the United States faces today.”

It then listed “racially or ethnically motivated violent extremists who advocate for the superiority of the white race” as the first of two “most lethal elements of today’s domestic terrorism threat.” In other words, it claimed white supremacy is the most deadly aspect of our country’s top terrorism threat.

Pair that with another news item. During a June 23 congressional hearing, chairman of the Joint Chiefs of Staff Gen. Mark Milley, in addition to echoing lies that the Jan. 6 Capitol riot was somehow fueled by feelings about race, fully embraced the left’s race-centric talking points.

Carlson addressed Milley’s comments on his show, criticizing the general for being “obsequious” and saying, “Notice he never defined white rage? And we should know what it is. What is white rage?”

It wasn’t long before corporate media heads jumped into the ring, with CNN and others branding Carlson as the definition of white rage.

“You are White rage, Tucker. You are. And you know it,” Russia hoaxer and “Reliable Sources” host Brian Stelter tweeted after the segment aired. His CNN co-worker Brianna Keilar echoed the same. “The Daily Show with Trevor Noah” tweeted a video calling Tucker a “white supremacist” and “white rage.”

It was just after this that Carlson said on-air that the National Security Agency was spying on him and his team in an effort to sabotage his show, and that he could prove it.

“Yesterday we heard from a whistleblower within the U.S. government who reached out to warn us that the NSA, the National Security Agency, is monitoring our electronic communications and is planning to leak them in an attempt to take this show off the air,” Carlson said on his June 28 show. “The whistleblower, who is in a position to know, repeated back to us information about a story that we are working on that only could have come directly from my texts and emails. … The NSA captured that information without our knowledge.”

Everything’s an Emergency if Your Opponent’s a Terrorist

The NSA delicately wordsmithed a statement denying Carlson’s claim — at least his allegation that they targeted him. The National Security Agency never denied reading the Fox News host’s texts and emails. More concerning, however, is that although the NSA rightly noted it technically cannot target U.S. citizens, it gave itself a massive carveout: emergency exceptions.

“NSA has a foreign intelligence mission. We target foreign powers to generate insights on foreign activities that could harm the United States. With limited exceptions (e.g. an emergency), NSA may not target a US citizen without a court order that explicitly authorizes the targeting,” the agency said in a statement.

A statement from NSA regarding recent allegations: pic.twitter.com/vduE6l6YWg

Emergency exceptions? Like, say, perhaps an American citizen who embodies “white rage” or who is a “white supremacist,” which — in case you hadn’t heard — is the biggest terror threat of our time?

We all witnessed the kinds of “emergency exceptions” that justified Democrat leaders ignoring constitutional liberties because of a virus. If you don’t think the “exceptions” bar will be lower for what has been deemed the “most urgent terrorism threat” in the United States, think again.

This is classic left-wing collusion that occurs among Democrat politicos and bureaucrats, their friends in the media, and the deep state. Sometimes they loop in extras — in this case, a political military actor, or on a past occasion, a British spy. Step one: Identify the conservative position. Step two: Hyperbolize and demonize it. Step three: Let the media parrot the false narrative. Step four: Justify state force against “extremist” opponents.

It’s easy to justify breaking the law and seizing power when you can make your rivals out to be domestic terrorists — and that’s exactly what the left is doing to conservatives like you.