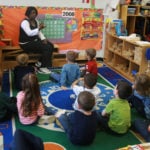 An elementary school in Anne Arundel County, Maryland hosted a lecture that told students the detention of illegal immigrants at the southern border today is similar to Japanese-Americans being placed in internment camps under the leadership of Democrat President Franklin D. Roosevelt during World War II.

The May 14 virtual lecture at North Glen Elementary, which serves students in pre-K to fifth grade, was part of Asian-American History Month. As The Washington Free Beacon reported, the school ventured to compare America’s shameful internment in the 1940s of over 100,000 citizens to the nation legally apprehending those who violate immigration law.

“What do you notice about these two images? What looks the same? What looks different?” a teacher states while showing a picture juxtaposing Japanese-Americans and illegal migrants. “The first image was taken in 1942. That’s about 80 years ago. This was a Japanese internment camp.”

“This was ordered to be done by the president at the time, Franklin D. Roosevelt,” the teacher continued. ” …Many Japanese people living in the U.S., and Japanese-Americans, are still heartbroken and angry about how the U.S. government treated them. Today, many of them are speaking out against the U.S. government using old Japanese concentration camps as detention centers that detain families that are crossing the Mexican and U.S. border to escape violence in other countries and to find safety for their families here in the U.S.”

One local Republican councilman, Nathan Volke, told the Free Beacon it was a “disturbing” lecture. He said, “there is no parallel to the forced imprisonment of Japanese Americans, who were citizens of the U.S. during World War II, and the temporary detainer of individuals entering the U.S. illegally.”

North Glen’s lecture also referred to the abolish ICE and police defunding initiatives as grassroots movements, and other movements as supposedly for “human rights and justice for all.” Further, an educator reportedly emailed parents that “there are components of critical race theory embedded within [the curriculum].”

The Maryland school did not respond to The Federalist’s request for comment.

Bob Mosier, a spokesman for the district, forwarded The Federalist the following comment:

“This video was brought to our attention late last week and we have been investigating its development and use since that time. It is not a systemic curricular piece that was developed by our Division of Curriculum and Instruction and, to our knowledge at this point, was utilized only at one school. We will take any necessary and appropriate actions once the investigation is complete.”

Why Was Texas Synagogue Jihadi Allowed Into U.S. Two Weeks Ago Despite ‘Long Criminal Record’?

School Closures Reveal Progressivism for What It Is