To Solve Homelessness, the Underlying Reasons Must Be Addressed 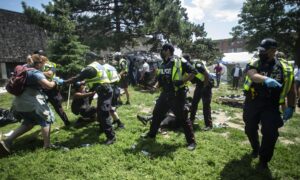 The scenes were shocking as activists clashed with police officers who were dismantling a homeless encampment in Toronto on July 21. Officers were compelled to use pepper spray and force as activists linked arms and attempted to block the efforts of the police. In the end, 26 activists were arrested and the encampment was removed.

This scenario is becoming all too common as every major city in Canada grapples with the growing problem of urban homeless encampments.

Contrary to what activists may claim, cities and police forces have been using an incredible amount of patience and restraint in dealing with encampments. Housing options are available and offered along with counselling. Weeks of warnings preclude any police actions against encampments, and residents are given plenty of time to relocate if they choose to. Physical action to dismantle camps is a last resort after all other efforts to resolve the issue have been attempted.

It’s not the case that the residents of these camps had nowhere else to go. They chose to remain in the camps despite warnings and often with the encouragement of activists, who appear eager to see conflict at times.

Urban homeless encampments are not sustainable, nor are they any kind of long-term solution to the issue of displaced people. Explosions rocked a homeless camp in Nanaimo last December as a fire ignited propane tanks kept by residents. Also last December, murder charges were laid after a man was found dead in a Surrey, B.C., homeless camp, and in April of last year a 15-year-old boy was sexually assaulted in a Victoria homeless camp. We can’t pretend that the residents of these encampments are harmless. They are troubled people and they put each other as well as the surrounding communities at risk.

Health hazards due to uncleanliness in encampments are real as well. City parks simply weren’t designed for long-term camping. While many cities try to mitigate issues with the placement of extra trash disposal and portable washroom facilities, feces and garbage remain problems. Drug paraphernalia is often found discarded, while rats have even become an issue in some parks as municipal crews can’t safely access the areas for maintenance and cleanup. People in the camps are distressed and don’t see the use of syringe disposal bins, trash receptacles, or washroom facilities as immediate priorities for themselves.

The hard reality that most people do not want to face when it comes to handling those who reside in homeless encampments is that many of them need intervention and treatment. While activists like to claim that the issue is merely a lack of housing, that simply isn’t true. Cities provide many kinds of transitional and long-term housing options for the impoverished. When a person is deep in the throes of drug addiction or has serious mental health challenges, they can’t be placed in shelters or low-income housing units. Untreated addicts and people with mental health issues put fellow residents in housing facilities at risk along with staff and volunteers. These people need specialized care, and they are falling through the cracks. That is why they often find themselves in tent cities.

While dismantling homeless encampments is unavoidable, if we don’t address the underlying reasons that people reside in these camps, nothing will change. The camps are but a symptom of a larger problem.

Seriously addicted individuals and people with mental health challenges can’t simply heal themselves. They need assessment and treatment, and this often means an in-patient system. We have to accept that some people may need to be institutionalized and, yes, at times against their will. The other alternatives are for people to end up within our prison system or in our hospitals, which are already under stress due to capacity issues.

Secure treatment centres don’t have to be prison-like. And the days of the old mental institutions such as the one depicted in the film “One Flew Over the Cuckoo’s Nest” are a thing of the past. Secured treatment is not a punitive measure. The goal needs to be the rehabilitation of the patient rather than permanent housing. While some may view forced institutionalization as cruel, is it any more cruel than leaving people to live on the streets? The people in homeless encampments, while being technically free, are living miserable and often short lives.

Chronic homelessness won’t solve itself. Those who tend to reside in tent camps are unable to take care of themselves. We have a tough choice to make: Do we intervene and try to treat them? Or do we simply keep chasing them around from camp to camp?

Currently, we are trying to convince ourselves that these are people who have simply hit a road bump in life and will eventually pull themselves out. The reality is that this problem isn’t going anywhere until we intervene in ways beyond dismantling tent camps.

Cory Morgan is a columnist and business owner based in Calgary.