Joe Biden’s Disappearing Act Is Not New. It’s How He Became President 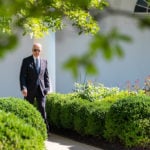 It was a running gag throughout his candidacy for president. At 9 or 10 a.m. the Biden campaign would call a “lid” on the Democratic nominee. The once inside baseball term indicating there would be no appearances from the candidate that day came into the public parlance. Another day in the basement, we all laughed. Well, that joke isn’t funny anymore.

Last week as the Taliban stormed across the Afghanistan abandoned by Biden, he once again went into hiding. Somewhere amongst the looming trees and homey wood paneling of Camp David, he sat, most likely mulling over how his experts could have misled him so badly. The Americans he serves saw but a single image of their president, alone in a briefing room, staring at a Zoom call with those experts.

Finally Monday, amid growing pressure he emerged, to throw his predecessors, including Barack Obama, under the bus and pretend everything was going according to his plans. Except, he has no plans. He is barely even a president.

It was just a week ago that Biden was celebrating the Senate passage of his infrastructure bill. But even that, one of few victories in his seven months in the Oval Office, owed more to Democrats like Sens. Joe Manchin and Kristen Sinema than to his leadership. His victory lap on roads and bridges wound up in a multi-car pile-up as New York Gov. Andrew Cuomo abruptly resigned and the COVID-19 crisis reemerged.

Now Sleepy Joe is back in hiding, at his summer camp of discontent, and why not? It’s how he became president. Many who penciled in the bubble next to his name wanted a less all-present president than Donald Trump had been. They wanted normalcy, calm and pleasant platitudes. And they got that, but they got something else, too. They got a president who is essentially irrelevant.

Let us recall that the fiercest critics of Donald Trump were not the babbling talking heads of cable news, but rather the career bureaucrats who could not control him. These were the professionals, the top men and women who believe they should be running the country even though nobody ever cast a vote in their name. They were supposed to bring back normalcy, instead we have skyrocketing inflation, utter confusion over the coronavirus, a border crisis, and now abject humiliation as we flee from a nation of goat herders.

On Monday both German Chancellor Angela Merkel and French President Emmanuel Macron announced they would address their nations on the Afghan crisis, but nothing was on the schedule of our Commander in Chief. A scrambling administration announced suddenly that Biden would make remarks, but at this point, propping Biden up in front of a few flags and a microphone was far too late.

Democrats insist that similar scenes of chaos and confusion would have played out if Trump were still president as our troops left Afghanistan. Maybe, maybe not, that is something we will never get to know. But we can be pretty sure about one thing, even if these horrors did occur under Trump he would not be in hiding, He would not abandon his duty to the American people because the road got a little bumpy.

Americans have never before experienced this kind of abdication from a sitting president. Somebody is running the country, it is a popular Beltway parlor game to speculate as to whom that might be, but it is clearly not Joe Biden. And now Americans must accept that for the next three and a half years we may not have a functional president.

But isn’t this why he was elected? To make awkward jokes about how mature little girls look and pose with ice cream cones while the experts run the show behind the scenes? When you vote for a candidate who won’t leave his basement you can’t really be surprised when he governs from it. Now the Afghan people are paying a bloody price, and the American people have no leader. But hey, there are no mean tweets.

In the relatively brief history of the United States we have had good presidents, bad presidents, some who were a little of both. But it is rare that we have had no president. Camp David must be lovely this time of year, a restful retirement home. But as Biden bids farewell to his responsibilities as president, let us not allow his disappearing act to be a retirement for America.