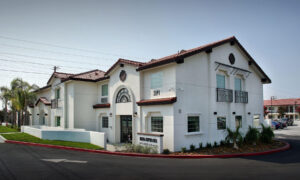 Called Buena Esperanza, the project took the former Econo Lodge and completely renovated it into a permanent supportive housing community, with 69 studio apartments for veterans, those with mental health issues, and homeless individuals.

“With Buena Esperanza, we’ve replaced an outdated motel with housing that will change lives,” Mayor Harry Sidhu said in a statement.

“Anaheim and our partners are leading the way in addressing homelessness with groundbreaking responses to California’s housing crisis. Our Motel Conversion Program, the first of its kind in Orange County, is bringing new permanent, supportive housing to Anaheim and helping those living in homelessness get on a pathway toward a better life.”

The Spanish-style housing, which is located off of La Palma Avenue, received an interior and exterior update of the former two-story motel, as well as the construction of a new one-story 1,800-square-foot community center. The development cost $25.4 million and took about two years to complete.

Each 300 square foot studio apartment features a living or sleeping area, a small kitchen, and a full bathroom. Residents are able to live there as long as they like. Additionally, the apartments are equipped with a bed, microwave, refrigerator, a table with chairs, and a stovetop burner.

In terms of rent, tenants will pay a portion of their rent based on income, with the average tenant paying $283 per month. Tenants must also be at or under 30 percent of the area median income to apply, with room preference given to homeless individuals in Anaheim.

The community features a lot of amenities as well, with the new community spaces offering counseling rooms, a small-group meeting space, community kitchen, resident lounge, and a large outdoor space for activities and gatherings. They will also be offered support services such as medication-management assistance, mental health counseling, help with job placement, and more. There will also be on-site laundry, barbecues, and a community kitchen.

“I am proud to see this project come to life. Thanks to the hard work, vision, and collaboration between city departments and our partners, we’ve turned what was a blighted motel into a beautiful place where lives can be restored,” Tim Houchen, chairman of the Anaheim Housing and Community Development Commission, said in a statement. “It’s a great, quality space for those who are homeless to get the housing, case management, and support they need. I would love to see more projects like this on an even larger scale.”

The housing is located in a vibrant area where lots of nearby stores and markets can be accessed without needing a car. There are a number of parks, restaurants, residential homes, schools, and grocery stores nearby within walking distance.

Funding for the project came from federal and state housing dollars, a city loan from Anaheim Housing Authority and the County of Orange, as well as private funding from Disneyland Resort and Providence Southern California. It was developed by Jamboree Housing Corporation. Drew Van Voorhis
Drew Van Voorhis is a California-based daily news reporter for The Epoch Times. He has been a journalist for four years, during which time he has broken several viral national news stories and has been interviewed for his work on both radio and internet shows.
DrewVanVoorhis