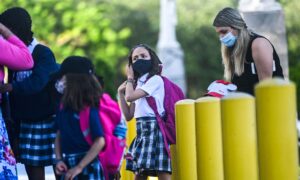 The order, announced Tuesday, takes effect Sept. 7 and applies to everyone in education buildings, vaccinated or not.

Students spent most of the last school year in cyber school, isolated at their home computers. When they returned to classes, they wore masks as part of a Health Department order calling for everyone in the general public to wear masks.

That universal mask order was lifted as the vaccine became available and more people got the shots.

Children are statically less likely to contract COVID-19. Vaccines are now available for anyone age 12 and up.

Gov. Tom Wolf, a Democrat, originally said any future masking orders would be enacted at the local level. But then last week he asked leaders of Pennsylvania’s Republican-led legislature to call the legislature back into session and pass a mandate to require all schools and childcare centers to make children wear masks.

Senate President Pro Tempore Jake Corman and House Speaker Bryan Cutler refused that request, but reminded that getting vaccinated is a good way to be protected from the virus.

“My office has received an outpouring of messages from parents asking the administration to protect all children by requiring masks in schools,” Wolf said in a press conference with the departments of Health, Human Services, and Education. “The science is clear. The Delta variant is highly transmissible and dangerous to the unvaccinated, many of whom are children too young to receive the vaccine. Requiring masks in schools will keep our students safer and, in the classroom, where we all want them to be.”

Wolf felt he could not leave the masking decision in the hands of school boards.

“I preferred for local school boards to make this decision. Unfortunately, an aggressive nationwide campaign is spreading misinformation about mask-wearing and pressuring and intimidating school districts to reject mask policies that will keep kids safe and in school,” Wolf said. “As we see cases among children increase in Pennsylvania and throughout the country, this is especially dangerous and challenging as we seek to keep kids in school and maintain a safe and healthy learning environment.”

Republican senators have asked for data from the Health Department officials, showing how many of the hospitalized have been vaccinated. In a letter to Wolf, they said they understand that most of those hospitalized with COVID in Pennsylvania are unvaccinated.

Those numbers were not provided in Tuesday’s press release.

“The reality we are living in now is much different than it was just a month ago,” said Acting Health Secretary Alison Beam in a statement. “With case counts increasing, the situation has reached the point that we need to take this action to protect our children, teachers and staff. The science is clear. If we want to keep our schools open, maintain classroom learning and allow sports and other activities to continue, masking significantly increases our chances of doing so.”

The Centers for Disease Control (CDC) and the American Academy of Pediatrics recommend universal masking in schools.

The Delta variant is more contagious than the original strain of the virus, accounting for more than 92 percent of current COVID-19 cases in Pennsylvania, the Department of Health said in a press release. Since July when schools first began discussing health and safety plans, Pennsylvania’s COVID-19 caseload has increased from less than 300 a day to more than 3,000 a day—with cases among school-aged children increasing by more than 11,000 in the last month, and by more than 79,000 from January 2021 to August 2021.

The Wolf administration continues to urge eligible Pennsylvanians to get vaccinated.

Beam signed the order under her authority provided by the Disease Prevention and Control Law, according to a press release.

The order applies to everyone indoors at K-12 public schools including brick and mortar and cyber charter schools, private and parochial schools, career and technical centers, and intermediate units. The order also applies to early learning programs and child care providers for children ages 2 and older, as recommended by the CDC.

The order does not apply to school sports or outdoor activities.

Failure to implement or follow the order may subject a person to penalties under the Disease Prevention and Control Law of 1955 and exposure to personal liability, the press release said.

Pennsylvania House Majority Leader Kerry Benninghoff, a Republican, released a statement on the mandate: “After months of telling Pennsylvanians that mitigation orders are a thing of the past, the Wolf administration once again went back on its word and issued another ill-advised statewide mandate that deprives Pennsylvania communities of local control and community self-determination in public health decisions. Unfortunately, the administration has turned a deaf ear to the people of Pennsylvania who passed two constitutional amendments in May that sent a clear message that things need to work differently in this state. House Republicans stand ready to follow through on that and are already in the process of taking a serious look at potential legislative changes that address this administration’s misuse of current law.”