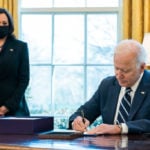 Left-wing leaders frequently accomplish their goals by hijacking preexisting infrastructure to fit their objectives. They often do this with language, perhaps nowhere as clearly as the redefinition of “sex” to encompass “gender identity and sexual orientation.” So far, these endeavors have been successful — albeit through executive order and judicial activism — but now Republican state lawmakers are pushing back, specifically on Title IX.

In response to a Title IX executive order out of the Biden administration, 20 states are suing the Department of Education, the Equal Employment Opportunity Commission (EEOC), and the Department of Justice. Their complaint, filed in the U.S. District Court for the Eastern District of Tennessee on Aug. 30, asks for declaratory and injunctive relief and centers on the way that both of these federal entities have “issued ‘interpretations’ of federal antidiscrimination law far beyond what the statutory text, regulatory requirements, judicial precedent, and the Constitution permit.”

In other words, the law under Title IX of the Education Amendments Act of 1972 protects people from being discriminated against on the basis of sex in educational settings where the institution receives federal funding. But the bureaucrats in the Biden administration, by “flouting procedural requirements in their rush to overreach,” have decided to rewrite the law so that wherever “sex” appears, it actually means “sex, gender identity, or sexual orientation.”

This overreach from Biden’s Department of Education and EEOC creates its own barrel of problems, of course — not the least of which is the fact that by writing “gender identity” into the meaning of sex, the people who do not deny basic biology will assuredly face discrimination. Just ask Margaret Oneal Monteleone, Madison Kenyon, or any number of other female athletes who have been stripped of opportunities and accolades ultimately because they are women.

Another huge issue, however, is the way this rewriting of Title IX came about. It resembles the pattern of bureaucratic overreach throughout the Wuhan virus pandemic, when unelected officials expanded their power through “emergency” declarations and ruled by fiat without punishment, such as through sweeping mask mandates or stay-at-home orders.

The Biden administration and the courts have employed the same tactics with federal law. This time under the guise of fighting “discrimination,” Biden and the head honchos over at the Department of Education and EEOC have grown their power by expanding the definition of sex and thus completely changing how students, educators, and institutions are required to conduct their affairs — on the field of athletic competition, in sexual assault allegations, and even in locker room dos and don’ts.

It would be one thing if Congress were widening the scope of Title IX. Although Republican members might disagree or it might later be ruled unconstitutional, the legislative deliberations themselves would at least be constitutional and would allow for rigorous debate, an amendment process, and accountability for lawmakers at the ballot box. Think of the Equality Act.

In this case, however, President Joe Biden issued an executive order on his very first day in the Oval Office decreeing that “sex discrimination” also secretly denotes transgender-identifying people and homosexual-identifying people. He didn’t stop with his garden-variety “Every person should be treated with respect and dignity and should be able to live without fear, no matter who they are or whom they love” statement, though. He instructed the federal agencies to do the dirty work of implementing his false definitions.

It then became the job of the Department of Education and the EEOC to ensure that if a man wanted to compete on a women’s track team, he was allowed to do so if the school ever wanted to get a taxpayer-funded federal cashflow. If a man wanted to change in the women’s locker room or peek into the shower room, the same rules would apply. So the agencies put out new guidance on federal anti-discrimination law.

“The Biden administration is letting bureaucrats usurp the people’s authority to make the laws, and is trampling on religious liberty,” Bowman continued. “ADF has filed multiple lawsuits to stop this government overreach, and many states are bringing similar cases. The administration is already losing in court over its other bureaucratic mandates and we believe the courts should also protect common sense views about biology in education, health, and the workplace.”

What’s the Deal with Bostock?

As conservatives warned at the time, the Supreme Court’s Bostock decision opened the door for this expansion of definitions and overhaul of norms. In fact, in their Title IX guidance, the federal agencies claim that the expansion of “sex” to mean “gender identity and sexual orientation” is required by the infamous court case. The Republican attorneys general filing the suit, however, disagree.

“The Department [of Education] and EEOC claim that their interpretations are required by the Supreme Court’s decision in Bostock v. Clayton County,” the lawsuit says. “But Bostock was a narrow decision. The Court held only that terminating an employee ‘simply for being homosexual or transgender’ constitutes discrimination ‘because of … sex’ under Title VII of the Civil Rights Act of 1964.”

Tennessee Attorney General Herbert H. Slatery’s office elaborated on that. Bostock, his spokeswoman told The Federalist, “concerned only Title VII and hiring and firing decisions. Title IX and its implementing regulations expressly allow sex-separated living facilities and sports teams. And even the plaintiffs in Bostock took the position that providing separate locker rooms and restrooms for different sexes may not constitute unlawful discrimination under Title VII.”

“The Supreme Court in Bostock explicitly said what issues they were not deciding, which included issues raised in our complaint,” she continued. “The Court could have been just silent and not made those statements. The fact that it went to that length to narrow Bostock undermines the broad interpretation by the federal agencies.”

“I strongly support Attorney General Peterson and all the states pushing back on the Biden Administration,” Nebraska Republican Gov. Pete Ricketts told The Federalist. “It’s fundamentally unfair that President Biden wants to force states to allow biological males to play girls’ sports and access to girls’ locker rooms. I’m confident that states can stop this draconian overreach and protect girls’ sports and our way of life.”

For the same reason the courts should strike down unconstitutional abuses of power with regard to the never-ending pandemic, such as mask mandates for vaccinated people in counties with zero COVID deaths, they should also send a message to the president that he can’t just change the meanings of words to completely rewrite laws. “Sex” can’t just mean whatever the commander-in-chief and his unelected subordinates want it to mean — and the court should use this lawsuit as an opportunity to make that abundantly clear.