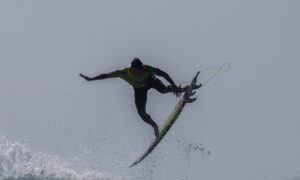 Not even the appearance of a 6 foot (1.8m) shark in the last heat could unsettle Medina, who qualified in the top spot for the five-man, one-day event, giving him the luxury of a direct passage to the finale at Lower Trestles, in San Clemente.

Under a new format introduced this year, the men and women ranked in the top five after seven events qualified for the one-day event at Southern California’s premier high-performance reef break.

Both Medina and Toledo unleashed an array of powerful slashing turns and progressive aerial manoeuvres in the clean, overhead waves.

But it was Medina who consistently landed the most outrageous moves—including a full back-flip in the deciding heat when competition resumed after a pause following the shark sighting.

Medina, who had questioned the fairness of deciding the world champion under the new one-day format, was the form surfer of the year, ending the seven-stop world tour with two wins and three second-place finishes.

“I’m so happy,” Medina said after his win. “I’m crying right now, because there’s a lot of emotion you know.”

Previously, world champions were decided on points accumulated throughout the year, which meant the title race was often decided before the final event.

Along with the new format, the surfers had to battle major disruptions to the world tour caused by the coronavirus pandemic, which caused the cancellation of a number of events after wiping out competition in 2020.

Medina paid credit to his countrymen on the tour, the “Brazilian Storm” who dominated this year and won the sport’s first Olympic gold medal through 2019 World Champion Italo Ferreira.

“The Brazilian guys are doing so well right now. It feels good to push them, and they push me,” he said.

Moore’s powerful carves were ideally suited to Trestles’ big green walls but she had to fight back after Weston-Webb came out firing and won the first heat of the finals.

“It was a crazy back and forth battle. I’m so happy to fight back,” Moore said, who won her fourth title in 2019. “Number 5 sounds pretty good!”