When I Was A Kid, It Was Nothing For Boys To Play With Girl Toys. Now, It’s Life-Threatening 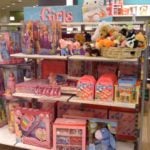 Take a moment to reflect back on your life. What’s the most dangerous thing you’ve ever done? Military service? Excessive alcohol consumption? Sky diving?

When I look back, I see I made a decision that, had it been made today, may have utterly destroyed me: As a toddler, I was fascinated by light-up toys. So, in a local Toys R Us, I, a male child, asked my mother to buy me a pink dollhouse specifically because it lit up.

My mother thought nothing of it. She bought the toy, and I played with it, alongside my GI Joes, Big Wheel, and all the other beloved playthings of the era. As it should have been, that was the end of it. No one was concerned that I wanted a toy decorated for girls, and I played with it without a second thought until new toys caught my interest. Fortunately, I was raised by rational parents in a somewhat rational time, and emerged into adulthood unscathed.

Unfortunately, we now live in an increasingly irrational time among irrational people, and I increasingly wonder what may have happened were I a toddler today. What if my parents had assumed that because I wanted a dollhouse I must be suffering from gender dysphoria? Would they have repeatedly asked an impressionable, confused toddler whether I was a boy or girl?

Maybe I would have mentioned my toy to a teacher. Would the school have pushed a different gender identity on me, without parental consent? At that point, could a court remove me from my parents’ custody to ensure that I could undergo medical mutilation? I can imagine what would follow: puberty blockers, chemical castration, and perhaps even mental health problems and higher mortality risks ... all starting with an innocent request for a toy.

I initially thought this hypothesis was overly dramatic. Surely a life-changing decision of the magnitude of changing a child’s gender must be based on something more substantial.

I was thus chilled when I came across the unfortunate case of seven-year-old James Younger, who requested a feminine toy at McDonalds, wanted to imitate female characters from the Disney hit “Frozen” (allegedly with urging from his mother), and asked to wear dresses. As a result, he is now undergoing “social transition” as a girl named Luna.

A court ruling awarded full custody of James to his mother, who supports the gender transition against the wishes of his father. A City Journal article describes multiple such cases in which parents had to fight the overreaching hand of government to protect their children from being transitioned.

Take, for instance, the case of a father who checked his suicidal, autistic teenage son into Seattle Children’s hospital to treat him for depression. Barred from visiting the hospital due to COVID-19, he was stunned when the hospital called demanding that he take his “daughter” to a gender clinic.

The father was told by his lawyer that, should he give any indication that he would not comply, the state could take custody of his son. Once he removed his son from the hospital, his family fled the state.

The logical flow of events from a little boy buying a dollhouse to being taken by Child Protective Services now seems quite far from far-fetched. Would playing with a dollhouse today be interpreted as a sign of gender dysphoria? Or what if I had gone a small step further and worn a feminine costume for Halloween?

Republicans Need Unity on This Issue

The issue presents a crossroads for the conservative movement. Republican-led states such as Tennessee and Arkansas have banned gender reassignment mutilation for minors, and other states are proposing similar legislation. Yet the right is far from united on this front.

Republican Arkansas Gov. Asa Hutchison defended his veto of legislation banning gender transition surgeries for minors (although this veto was overridden). “I vetoed this bill because it creates new standards of legislative interference with physicians and parents as they deal with some of the most complex and sensitive matters concerning our youths,” he wrote. “Government, under a conservative philosophy, should be restrained.”

Utah GOP Gov. Spencer Cox emotionally denounced legislation restricting transgender participation in sports, noting that “[I]f you have not spent time with transgender youth, then I would encourage you to pause on this issue … When you spend time with these kids, it changes your heart in important ways.”

More broadly, former Republican Speaker of the House Paul Ryan criticized conservatives for getting “caught up in every little cultural battle. Sometimes these skirmishes are just creations of outrage peddlers … [t]hey draw attention away from the far more important case we must make to the American people.”

Such arguments are deeply flawed and dangerous for the Republican Party.

How Transgender Issues Profoundly Affect Us All

The reality is that the transgender issue profoundly affects all of us, particularly parents of impressionable children. Children are increasingly exposed to transgenderism via lesson plans, cartoons, toys, and books. The number of children undergoing gender transitions has skyrocketed in the past decade.

Government intervention in gender transitions has become increasingly aggressive. As a consequence, this “cultural” issue affects the average person more than other GOP talking points, such as government spending and foreign policy, and cannot be dismissed by our political leaders.

Nor can conservatives simply write off the issue as “between a doctor and patient.” Because the American Psychological Association and American Medical Association both support affirmation of gender transitions as a matter of policy, the outcome of the doctor-patient meeting is thus a foregone conclusion.

Those who criticize gender transition are immediately censored. For example, Dr. Lisa Littman of Brown University published a 2018 article describing the phenomenon of “rapid onset gender dysphoria,” in which gender transitions are significantly influenced by social factors. Leftist activists quickly pushed back and Brown University removed a press release regarding the publication.

Two similar works on the topic, “Irreversible Damage: The Transgender Craze Seducing Our Daughters” by Abigail Shrier and “When Harry Became Sally: Responding to the Transgender Moment” by Ryan T. Anderson have also been banned by various booksellers.

Such acts of censorship indicate we are past the point of honest scientific discussion regarding gender dysphoria, and do little to instill confidence that our physicians are capable of providing sound guidance for our youth. Popular figures who have not completely toed the line on transgender issues have faced severe backlash, such as J.K. Rowling, Gina Carano, Martina Navratilova, and John Cleese.

Until conservatives can better resist this movement, should your male child request a dollhouse, make sure no well-intending bystander hears.