In Soft Power Battles, Taiwan Should Take A Page Out Of China’s Hollywood Playbook 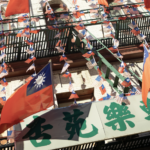 In 1999, concerned about the looming rise of the People’s Republic of China (PRC) and noting a deficit of books on the topic, I used my skills as an Army intelligence officer to research the order of battle of a conflict between the PRC and Taiwan, then war-gamed the fight.

Needing an expert in Chinese history and culture as a co-author, I was fortunate to interest Steven W. Mosher to the project. “China Attacks,” a technothriller novel in the Tom Clancy vein, was the result.

Published in 2000, it received a decent amount of media attention, including favorable page 3 treatment in the Financial Times. This article triggered interest in Taiwan, where a publisher negotiated the limited rights for distribution of a Chinese-language edition in Taiwan and Hong Kong.

The publisher brought me out for a book tour in 2001 and I appeared live on Taiwan’s three major networks for the evening news. I also participated in a panel discussion in front of about 200 members of the national legislature and their staff. A spokesman for the pro-Beijing party even showed up to formally denounce the proceedings. One of the trip’s highlights was seeing the Chinese-language edition of my book in bookstores in Taipei.

An Unforgettable Trip to the Island Nation

In 2004, I was elected to the California State Assembly and the following year, was invited to participate in a delegation on the occasion of Double Ten, the National Day of the Republic of China marking the start of the Wuchang Uprising on Oct. 10, 1911.

I brought 20 copies of “China Attacks” to give away as gifts. I also took along a detailed film proposal to pitch a key presidential adviser to then-President Chen Shui-bian. I wanted to press the need for Taiwan to underwrite a film aimed at American audiences that would highlight the growing threat from China — and why it was vital that Taiwan remain free.

I met with the presidential adviser for more than half an hour. With strong ties to America, he seemed genuinely interested in the project’s potential. He ended the meeting by suggesting he already had something in the works along the same lines. I was hopeful that Taiwan was waking up to the need to use its considerable soft power potential in its struggle to survive.

Our last meeting on the island nation was with the Mainland Affairs Council, akin to the U.S. National Security Council, but with the sole focus of China. I autographed and gave away the last two copies of my book and turned to leave with the other legislators when one of the staffers came running out after me, and said, “Mr. DeVore! Mr. DeVore, I want you to know how much this means to us! Your book is required reading for the Mainland Affairs Council. You are a hero to us!”

I about broke down in tears. Thinking that someone of my station — merely a state lawmaker and only (then) a major in the reserve forces could be important to them vividly showed the terrible isolation under which Taiwan labored. Taiwan does exercise some soft power with modest documentaries and short films but hasn’t engaged on the scale that the People’s Republic of China (PRC) and its Chinese Communist Party (CCP) have.

Interest in the project advanced in fits and starts, with a few Taiwanese investors expressing interest. As soon as things looked to get real, however, they backed out, realizing that all their holdings in the PRC would be put at risk the moment the CCP knew that they had funded a film boosting the Taiwanese-American relationship.

Then, in 2007, Taiwanese President Chen Shui-bian was returning from a two-day diplomatic trip to Nicaragua, a nation that formally recognizes Taiwan. President Chen’s Boeing 747 was scheduled to make a stop at LAX on the return leg and a small group of politicians and Taiwanese expatriates were invited to meet with the president.

I intended to pitch the need for a major motion picture directly to the president. Unfortunately, the PRC pressured Mexico to deny overflight rights to the presidential aircraft and it had to divert far over the Pacific, causing a four and one half hour delay and the cancellation of all of the formal ceremonies with the plane landing at 9 p.m. On the positive side, I was one of the few elected officials who did show up to meet with the visibly exhausted president. I pitched him on the idea, and he seemed to grasp the possibilities of a major motion picture.

Later I heard the Taiwanese government approved almost $700,000 in seed money to start writing the script. I had recruited a Hollywood rarity to do the honors: a right-of-center duo responsible for more than $1 billion in gross box office receipts.

Yet I was again greeted by silence. President Chen had become embroiled in a corruption scandal in mid-2006 and his wife indicted in November of that year. Prosecutors indicated that once Chen left office, charges would be brought. Chen was effectively a lame duck. He was sentenced to prison in September 2009.

As it happened, 2009 was when the film Chen’s adviser had hinted at was made. “Formosa Betrayed” told the story of the repression of Taiwanese nationalists during Chiang Kai-shek’s dictatorial rule. It took the form of an American FBI agent tracking down the murder of a Taiwanese dissident. To say the 2010 film was forgettable would insinuate that it was actually seen — it grossed just $326,034 worldwide. Americans could not be made to care about the assassination of foreigners by a government of a small nation that no longer held power. It was a complete waste of money.

The PRC plays both soft power offense and defense, with Hollywood a key front in the battle. Defensive efforts take the form of using money as a lure to censor offensive content in film. A recent example was seen in the sequel “Top Gun: Maverick,” which in the original 1986 film featured Tom Cruise in a leather bomber jacket with the flag of both Taiwan and Japan on the back. But Chinese tech giant Tencent is backing the Paramount Pictures film and Tencent owes its continued existence to the sufferance of the CCP, so the offending flags were memory-holed faster than you could say, “Nikolai Yezhov.”

A more subtle effort was seen in the 2019 movie “Midway,” released about the same time as the Wuhan virus. As the Wall Street Journal noted in its piece, “Hollywood Revisits Battle of Midway—With Backing From China,” director Roland Emmerich attributed the film’s being made to his newfound Chinese friends who saved his movie after Hollywood nixed it. Two Chinese firms underwrote the film for $98 million.

This film promoted two themes, although not ham-fistedly: China was an American ally against Japan in World War II and the Imperial Japanese were particularly brutal. There was even a bit of slight of hand where forces of Chang Kai-Shek’s Nationalists were replaced by Mao’s Communists — something few viewers in America would have noticed.

With Americans now seeing China as a threat, as 45 percent of the public believes the PRC is our greatest enemy, doubling from a year ago (22 percent), this opens the possibility of a market for films portraying the PRC as a threat — although Hollywood, still in the thrall of Chinese box office receipts and funding, would likely blacklist any overtly anti-PRC film.

Thus, while a film portraying a conflict in the Taiwan Strait wouldn’t make the theaters in China, it could be popular if the nations of the emerging Quad alliance — America, India, Japan, and Australia — were positively depicted. For instance, if naval vessels from the Quad were shown sailing into the Taiwan Strait at the onset of a Chinese attack on Taiwan, with each of the ships’ crews behaving bravely against a terrible onslaught. India’s considerable Bollywood talent might be interested in such a film, or a well-funded independent effort could be produced.

Taiwan needs to acquaint the citizens of the Quad, and Western Europe, with what’s at stake between the PRC and Taiwan. The public needs to understand Taiwan is a democracy. More importantly, the world needs to recognize Taiwan may be all that’s standing between the free world and the Chinese Communist Party’s quest for world domination. Taiwan needs to up its game on the soft power contest with the PRC.