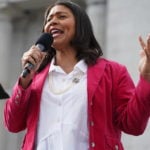 Democrat officials have yet again flouted their own COVID-19 restrictions in their most recent displays of hypocrisy.

The Palm Beach County School Board recently defied Florida Gov. Ron DeSantis’s ban on mask mandates, instead voting to implement a policy that would prevent parents from opting their children out of school mask mandates.

Now, a picture has surfaced on Facebook of Alexandria Ayala, a member of the Palm Beach County School Board who voted in favor of the mask mandate, attending a party without wearing a mask.

Not only did Ayala support the mask mandate for schoolchildren, she even initiated the motion in front of the rest of the school board. She expressed her fervent support of the mandate, saying “I think that I have made it pretty clear that I care about the safety of every child under our district more than anything else. I will protect that at all costs, in the face of bullying, in the face of threats to my position, in the face of funding, in the face of politics.”

Ayala even spoke out against medical exemptions from the mask mandate, remarking, “I don’t have time to wait or to allow people to exploit a medical opt-out which they will try to do. We need to be strong on this.”

In a similar act of hypocrisy, San Francisco Mayor London Breed was caught defying her own mask policies in a video of her partying without a mask at the Black Cat bar. Despite Breed’s clear violation of the policy, which states that one can only take off their mask while “actively eating or drinking,” the leftwing mayor doubled down, saying “I had a good time at the Black Cat. And I think it’s sad that this is even a story.”

In light of these displays, Americans are learning yet again that COVID-19 restrictions from leftwing politicians like Nancy Pelosi, Gavin Newsom, Alexandria Ayala, and London Breed only apply to average people, not to our political elite. Not only do these instances exemplify blatant hypocrisy, they suggest a hierarchy of acceptable behaviors that are far different for politicians than for the citizens they boss around.