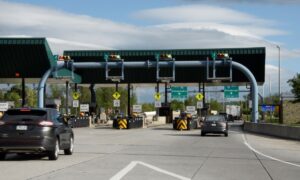 Currently, toll violators are subject to a suspended vehicle registration if they have at least six unpaid tolls, or total unpaid tolls of at least $500, with a three-year statute of limitations. The suspension continues until a violator’s outstanding tolls are fully paid.

A new rule would lower the threshold triggering a registration suspension from six violations of unpaid tolls to four violations, or from $500 in total unpaid tolls to $250. The statute of limitations would increase from three years to five years.

The proposal was recently announced by Republican State Rep. Tim Hennessey, majority chairman of the House Transportation Committee and Democrat Rep. Mike Carroll, minority chairman. Neither responded to a call for comment on Monday.

The Pennsylvania Turnpike collected $1.3 billion in toll revenue in fiscal year 2019. That was before COVID-19.

In fiscal year 2021, which ended in May, it collected $1.2 billion, Carl DeFebo, Pennsylvania Turnpike Commission spokesman told The Epoch Times in a phone interview.

Tolling has changed in the last year. In March of 2020, when the pandemic struck, the Turnpike Commission began operating without toll collectors. By June, the commission accelerated its plan to permanently replace human toll takers with all-electronic, cashless tolling—a move planned for late 2021. Nearly 500 toll collectors lost their jobs.

Now, all vehicles passing through tolling areas are scanned with an electronic eye. Drivers with EZPass make up 85 percent of the Pennsylvania Turnpike’s customers. They pay automatically as the system bills their bank account.

The electronic eye also takes photos of license plates on vehicles without EZPass. A bill is mailed to the vehicle owner.

It used to be a violation to drive through an EZPass lane without an EZPass transponder; now it is just a bill. This is where most nonpayments happen.

Some drivers ignore the bill, some license plates are obscured by snow, the vehicle owner may have moved to a new address, or there could be clerical errors while sending the bill.

The turnpike has an agreement with the Pennsylvania Department of Transportation (PennDOT) to look up the address on license plates. It also works with all other state departments of transportation for initial toll billing.

Vehicle owners are sent an initial bill, then a 30-day notice. If they don’t pay, the bill goes to a collection agency.

“We don’t have the authority to do that for other states,” DeFebo said. “We do have a reciprocal agreement with Delaware, but we’ve not begun to go after Delaware just yet.” Delaware is still finalizing details on its side.

Each state has different consequences for ignoring tolling bills, DeFebo said. Some impose fines, some suspend vehicle registrations and others suspend drivers’ licenses.

The commission is talking with other states, such as New York, to create more reciprocal agreements that will hold out-of-state drivers accountable.

Collection doesn’t end with suspended registrations. Some trucking companies owing large fines are taken to court. And now the Pennsylvania Turnpike is working with some district attorneys to press felony theft of services charges to those owing more than $2,000 in tolls.

“We collect 93 percent of what we are owed,” DeFebo said. “That is industry standard.”

But it is not enough to cover the Turnpike’s $14 billion debt.

How Your Toll Money Is Spent

In 2007, there was talk of making Interstate 80 a toll road to pay for transportation infrastructure. Instead, Governor Ed Rendell signed Act 44, requiring the Pennsylvania Turnpike Commission to provide PennDOT with $450 million a year to supplement funding for highways, bridges, and public transit. In 2013, Act 89 modified the payments to dedicate the full amount to public transit.

The turnpike owes around $8 billion for Act 44 loans, DeFebo said. It also borrowed for capital improvement projects. In 1985, Act 61 directed the Turnpike Commission to build two toll expansion highways. A 13-mile highway near Pittsburgh will open later this year, DeFebo said. The legislature has provided some funding for the project, but this also adds to the $14 billion debt.