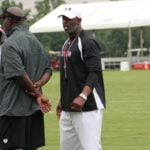 Jackson State’s Peyton Pickett shoved his Florida A&M defender to the ground to pick up extra yards on Sunday while the crowd went wild — something Pickett and other members of Jackson State’s football team are probably used to. But what they aren’t used to is being nationally broadcasted, as the game was.

National coverage is not taken lightly in the football world. It is coveted by all teams, all divisions, and all conferences.

This new partnership has been praised for highlighting black athletes, but the new broadcasts aren’t doing that at all. It is dividing the sport of football — a sport of tradition and unification.

Right now, in most American homes, you can find a college football game on some sort of broadcast on TV.  In week three of play, nationally ranked teams like Alabama, Florida, and Clemson flashed on many TVs, but this year these popular teams have shared the limelight on nationally syndicated broadcasts.

While HBCUs are defined as “any historically Black college or university that was established prior to 1964, whose principal mission was, and is, the education of black Americans,” top tier teams like Alabama, Florida, and Clemson are also schools with athletic teams historically composed of black players.

In 2018, Clemson had 57 black athletes on their roster. Of their last three national championships, two were led by starting African American quarterbacks, Deshaun Watson and Homer Jordan. But this isn’t just common at Clemson. On a larger scale, black athletes make up nearly 60 percent of all college football rosters.

Black athletes are getting covered, and for playing for schools other than HBCUs. Airing the games simply because the players are black creates division. After the new partnership with ESPN, headlines read, “Black College Football is ESPN’s New Baby.”

Head Coach of Jackson State Deion Sanders even created a separate HBCU or “black” combine for those athletes of HBCUs in preparation for the NFL draft. Instead of referring to the game as simply college football, or participating in one, shared combine, a specific distinction had to be made between the skin colors of those playing the game.

But why? For decades, the American sport has allowed those of all ethnicities to play together. Now, the emphasis on airing HBCUs makes it seem like the races must have their own circles in the sport, as opposed to sharing one.

And what happened to air time going to the teams that earned it? That is a more equal and fair option.

Conferences like SEC and BIG 10 get primetime coverage because they are the top in the sport, and they earned the right to be called that.

An historic culture comes with any big, Division I football game, and it is one that everyone can engage in and enjoy — just as the sport of football was created to do. Certainly there are teams with different demographics than the HBCU teams who aren’t getting national coverage and who are just as good, but those teams have to earn their coverage as opposed to having it given to them because of the color of their skin.

The situation would be different if ESPN were choosing to air all Division I teams, or even Division II or Division III, but ESPN is airing people for the color of their skin. If the roles were reversed what ESPN is doing would be rightly deemed segregation, because it divides the sport.

When President Gerald Ford was a student and football player at the University of Michigan in 1934, he nearly quit the team. Not because he was burnt out, or injured, but because his teammate Willis Ward — only the second African American to play football at the university — was told Georgia Tech would refuse to take the field if he was dressed and played.

Ford threatened to quit the team, which caused protests around campus on Ward’s behalf. Ford took a stand not so Ward could play on a separate team, but so they could share the field, and have equal status.

He took a stand so they could play the sport of football together. Football isn’t meant to be about skin colors and racial division, but about sharing the field and the sport and overcoming those divisions for the greater good.