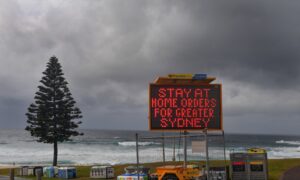 Experts in Australia are increasingly concerned by the harmful psychological impacts of lockdown and the way healthy family dynamics are disrupted.

An exhausted mum tries to work from home as her kids play up because they feel she’s ignoring them. Screen time and TV restrictions are out the window and the family’s natural harmony is up-ended.

It’s a pandemic scenario being played out in homes across the country.

While no doubt unsettling, a lack of domestic structure and routine is also having a harmful psychological impact, experts say.

A major report compiled by the Australian Institute of Health and Welfare has pinpointed increased levels of emotional distress during lockdown, particularly in younger people.

According to The First Year of COVID-19 in Australia, the prevalence of painful psychological symptoms associated with fluctuations in mood has been measurably higher.

By April this year, the effects of stress across the population had essentially returned to pre-pandemic levels for most adults yet they continued to be higher for the young.

Professionals are also reporting that parents are seeing and speaking with children less despite them being in the same house each day, psychologist Dr. Stefanie Lui Ten said.

The counselling platform she works for, ParentalEQ, has experienced almost a doubling in the number of parents reaching out for help in the past three months.

Ten said young children are often unable to comprehend why parents are working from home while teenagers revert to holing themselves up in their rooms.

“At the start of the pandemic children were considered low risk in regards to medical concerns from COVID-19 but now they are emerging as the invisible casualties,” ParentelEQ founder Francisco Fleming said.

“The lack of structure is having a major impact on relationships between parents and children as both are not going to work or school so there is no routine.”

Fleming, who has more than a decade of clinical research experience, said sleep patterns are usually the first casualty when routines go by the wayside.

Exercise is next, healthy eating patterns and then the line between study and relaxation becomes blurred.

“Parents are telling us they feel their child is less communicative as they spend more time on screens or in their bedroom and often not even sitting down to a meal together as children are grazing throughout the day,” he said.

With half of all mental health issues thought to begin before the age of 14, Mr Fleming says healthy communication with young people is vital.

“Communication styles can push people away or bring families closer so it’s important throughout the day to regularly communicate, even if only for 10 minutes while at other times it might be a lot longer,” he said.