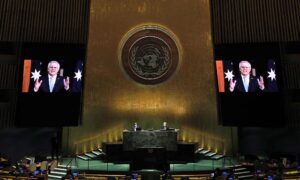 Australian Prime Minister Scott Morrison on Friday repeated calls for an independent investigation into the origins of the CCP virus to the United National General Assembly in a pre-recorded address in New York.

“Australia called for an independent review, and sees understanding the cause of this pandemic not as a political issue, but as being essential, simply, to prevent the next one,” Morrison said.

“We need to know so we can prevent this death and this calamity being visited upon the world again.

“That can be our only motivation,” he said.

The CCP virus is commonly understood to have first spread from China in March 2020 culminating in a global pandemic that’s still wreaking havoc on the health and economies of countries.

U.S. Secretary of State Antony Blinken has condemned Beijing’s trade actions, saying it is “blatant economic coercion” against Australia and that it was one of the most urgent threats facing the world.

Despite those trade actions having seen total exports to China fall over the year to the June quarter, Frydenberg said most of the $5.4 billion that normally goes to China was successfully redirected elsewhere.

In his speech to the U.N. General Assembly, Morrison also called for a stronger and more independent World Health Organization, with enhanced surveillance and pandemic-response powers.

He also called on the U.N. to maintain a “rules-based” global order, and stood by the recent decision to develop nuclear-powered submarines as part of a new AUKUS security pact with the United States and the United Kingdom, which has drawn pushback from France and China.

Despite Beijing’s claims to the contrary, and the bleating of its mouthpiece tabloid The Global Times, which sounded dire warnings, Morrison said the AUKUS alliance was designed to “further the cause of peace, stability and security in the Indo-Pacific region.”

“It is essential that countries pursue these interests in ways that are mutually respectful and support stability and security,” he said. “Because we want to maintain an open, rules-based international system that supports peace, prosperity, human dignity, and the aspirations of all sovereign nations.”

“A global order where sovereign nations can flourish, free from coercion, because of collaborative and purposeful action,” he said.

The new AUKUS resulted in Australia tearing up a $90 billion contract with France for diesel submarines, and will instead see the United States and the UK share sensitive technology to allow the development of Australia’s first nuclear-powered submarines.

Meanwhile, France recalled its ambassadors to the United Sates and Australia for consultations in protest of the deal.

Caden Pearson
Follow
Caden Pearson is a reporter based in Australia, with a background in screenwriting and documentary. Contact him at caden.pearson@epochtimes.com.au
cadenpearson