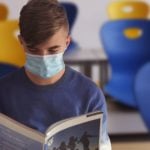 A group of parents in northeastern Indiana has reached their breaking point with government officials turning deaf ears to their children’s suffering under irrational and scientifically unfounded COVID rules with no clear end point.

After spending months trying to work with local officials to get their kids’ lives “back to normal,” only to have their school board allegedly break its own rules to mandate masks and quarantines of the healthy barely two weeks into this school year, four families filed a lawsuit against Indiana Gov. Eric Holcomb (R), his Indiana State Department of Health and its commissioner, their county health commissioner, Northwest Allen County Schools and its superintendent, and their local school board and several of its members.

The lawsuit alleges these officials have broken state laws and the state and national constitutions by quarantine “searches and seizures” that violate the Fourth Amendment and repeatedly restricting Hoosier children’s constitutionally guaranteed right to a public education based on unproven allegations that the children are COVID-infectious.

“It used to be that if you missed 10 days of school you were truant. Now kids are missing 30-40 days of school”a year because of extreme quarantine rules, said Andrew Frisinger, a father and plaintiff in the lawsuit.

In recent weeks, the district has sent more than 1 in 10 students home to quarantine based on the state’s “close contact” standard. Nearly all of those children were healthy. The lawsuit seeks precise data about how many children forced to quarantine were actually sick, as the district has not released that information publicly.

Walking through school halls in the district where he grew up, met his wife, enrolls his kids, and has spent years volunteering as a coach for myriad sports, “felt like walking into a funeral” under COVID regulations, Frisinger said: “Lunchrooms are quiet, hallways are quiet. Teachers who should be teaching are now focused on masks. Five years ago, we would have said, ‘This is not America.’”

Even when children are allowed in school, their learning is undermined by a fear-driven and science-free mask mandate and other COVID fear structures that make it hard to see people’s facial expressions, make schools a joyless and oppressive environment, and turn teachers from educators into mask police, said the parents who filed the lawsuit in a group call with The Federalist.

They are deeply concerned that their children’s most recent three school years—one-quarter of their K-12 careers—have been constantly disrupted and for no health benefits. It is well documented that children are the demographic at least risk from COVID. Yet children are being denied the education crucial to their futures, with no end in sight.

“To me it feels like they’re holding our kids’ education hostage. You can have all this that your tax dollars are paying for if you follow this rule, this arbitrary mandate,” Frisinger said.

The parents spoke of the effects on their kids of never knowing if a school event or school itself would go forward as planned, of their own and their kids’ confusion that rules arbitrarily differ from school to school and county to county with no apparent relation to health outcomes, of patently ridiculous rules like having kids eat and play sports together without masks yet the same kids on the same day being forced to mask to get on the bus.

“Not being able to play sports for some of my kids has been very hard. My children had to be at home countless days because of this, which has affected their grades. My oldest suffers from hearing loss, so you can imagine how hard that’s been,” said Jacqui Christman, a mother of five and with her husband also plaintiffs in the suit.

Some of their kids who have never gotten in trouble at school before are now constantly in trouble for mask violations, and some don’t want to go to school at all because of the massive psychological pressure, the parents said. With kids safer from COVID than from all the other flus that have never altered school operations, why are the adults doing this to them? Nobody will answer that question or just about any other, the parents said.

“The challenged quarantine procedures and contact-tracing program lack any rational basis, are arbitrary, capricious, and vague, have no real or substantial relation to the objectives of the program or mandate, and violate the Plaintiffs’ fundamental rights,” says the lawsuit.

Parents: This Is Our Last Resort

After seeking relief through every other means they could think of—attending school board meetings, calling and emailing elected representatives, talking with administrators—for now three school years, the parents feel they have no other option but to file a lawsuit, said their lawyer, Kevin Mitchell. The parents repeatedly expressed that they considered this step a last resort after they spent years trying everything else and getting nowhere.

“These are healthy kids they’re quarantining,” said plaintiff Mike Bell, a father of four. “We know it may bring unwanted attention to us or our kids. But we’re three years into this and it’s not going away. We’ve been patient, and we’re just done. No one is listening, and they [elected officials] keep pointing the finger at someone else. So I’m choosing to stand up for my kids, and I believe kids everywhere, and I am proud to be fighting for our kids and doing what we feel is right.”

The families described themselves as not rich or powerful, as a “simple fireman,” teacher, volunteer coach, moms, and dads who represent the “simple majority.” They believe they represent the clear majority of parents in their district, region, and state, noting that when students and locals are allowed to choose whether to wear a mask almost none do. They started a GoFundMe to help with legal expenses (disclosure: after learning about the fund while reporting this story, this author donated).

Indiana state law defines under what circumstances people may be placed under effective house arrest with a quarantine, and that law has not been followed during the entire pandemic, notes the lawsuit. One of the law’s requirements is that people must be proven to be contagious before they are forced to stay home under threat of arrest.

Local school requirements based on 18 months of constantly shifting executive decrees, however, flip that on its head and assume children are sick if they spent a cumulative 15 minutes in a day near someone who later tested positive, the lawsuit notes. It says this violates citizens’ rights to live freely until proven, through due process, to have violated the law. This also violates the children’s right to an education, the lawsuit alleges, by subjecting children to unlimited 14-day quarantines even when they are not sick.

“The whole structure has shifted to students and families to prove they are well enough to go to school. As a legal matter, that is sobering, and we should consider that,” Mitchell said in an individual interview. “Compare it to the Fourth Amendment context—when it comes to a search, there has to be a legal cause. To tell a student you cannot attend school unless you disprove something, that constitutional right to attend school has flipped. And that’s a right under the Indiana Constitution.”

The lawsuit also makes a rare challenge to the governor’s emergency powers, alleging state law does not authorize Indiana’s governor to “mandate medical treatment or intervention, including face masks, in K-12 schools.” The emergency powers law states its limit is 30 days. Yet Holcomb has now unilaterally extended his emergency powers a record 17 times.

“The position the health agencies are taking is [that] we’re in this indefinite health emergency and even though life has continued in other avenues, the students should continue to live restricted while everyone else is not,” Mitchell said, noting that Hoosiers are working, eating out, shopping, going to professional sports games and festivals, and living normally, without masks, just about everywhere except school.

Are There Any Limits to ‘Emergency Powers’?

The lawsuit also alleges that the governor’s myriad COVID dictates—which he has issued at least biweekly for the past year and a half—usurp the legislature’s constitutional authority to write and pass laws. Legally, governors are supposed to carry out the laws the legislature passes, not effectively legislate through executive orders.

“Certainly the governor has emergency authority, so the question then becomes what constitutes an emergency under the statute?” said former Indiana Attorney General Curtis Hill, a Republican, in a telephone interview. “It’s not a question whether an emergency occurred, the question becomes how long can you continue the process of the emergency and what is it you are authorized to do pursuant to that emergency?”

The state legislature has the authority to stop the governor’s lawlessness and end the state of emergency, Hill noted, but has for two years now left Hoosiers subject to arbitrary executive rule: “An emergency should only go so far, and at some point you want to enact legislative policy to direct people’s conduct. If there’s a reason to restrict the freedom of any Hoosier, that restriction should be subject to a legal exercise by the general assembly, those elected by the people.”

The office of the current state attorney general, Republican Todd Rokita, declined a request for comment on this case. Rokita has issued an opinion stating that in some cases state universities may force students to take COVID-19 injections.

The following request for comment was emailed to Holcomb’s press secretary, Erin Murphy:

I’m wrapping up the story I called you about repeatedly several days ago, and it’s set to go live early next week. It’s about a lawsuit against the governor and his health department based on their school masking and quarantine rules as enforced in Northwest Allen County schools.

I’m especially curious about the governor’s position on this contrasted with his statement condemning Joe Biden’s recent COVID mandates as ‘a bridge too far.’ I’d like to know what the governor sees as the main differences between his emergency rule and Biden’s emergency rulings, which appear to this layperson to be pretty indistinguishable.

In addition, I would like to know the governor’s position on the limits of his claimed emergency powers — that he can legally keep renewing Indiana’s state of emergency indefinitely? If that’s the case, how does an ‘emergency’ last 18 months and when do Hoosiers get their rights back?

I’m also curious about whether the governor has ensured that all the Biden-administration-approved Afghan refugees he’s welcomed into our state have gotten their COVID shots and whether they are being required to follow his health department’s quarantine and masking rules, or whether those are only applicable to American citizens.

Thank you! If I don’t hear from you by Monday I will be including this email in my article in full.

Murphy declined to comment on this case, claiming, “We don’t comment on pending litigation.” A review of the last 12 months of press releases from Holcomb’s office, however, shows him publicly commenting on several events involving pending litigation, including the assassination of an Indiana police officer, the Jan. 6 U.S. Capitol melee, state attorneys general opposing Biden’s vaccination mandate, and a lawsuit Holcomb filed to prevent the state legislature from restraining his emergency powers.

The next step in the lawsuit is for those sued to respond within approximately the next three weeks.

‘The pandemic is real, but children are neither victims nor vectors of this,” Frisinger said. “I just want to get back to normal, not only for the students but also for the staff we all support and love, and for the parents that are so confused right now.”