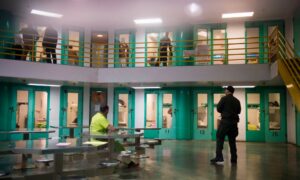 SANTA ANA, Calif.—Orange County prosecutors released a memo Sept. 27 stating that no one was criminally liable in the COVID-19 death of a jailed murder defendant in January.

In a letter to Orange County Sheriff Don Barnes dated Aug. 30, but publicly released Monday, Senior Deputy District Attorney Cyril Yu said, “There is no indication that [the sheriff’s department] failed to perform a legal duty that resulted in [Ah Le] Fang’s death.”

Yu’s review of the case showed that Fang repeatedly refused medical care, including medication for schizophrenia.

Fang was in custody awaiting trial on charges of fatally stabbing his 50-year-old mother, Lu Thao, and wounding her 75-year-old boyfriend. Fang was charged with murder and attempted murder for the Aug. 15, 2017, attack.

Fang’s mother called Fullerton police to report she was being attacked, police said. Officers who arrived on scene found the victim outside her apartment complex at 134 S. Pritchard Ave., suffering from a stab wound to her abdomen. Police also found her boyfriend, who sustained a stab wound to an arm.

Thao and her companion were taken to a hospital, where she was pronounced dead.

Fang lived with his victims and his adult sister, police said. Fang got into an argument with his sibling and then went to his bedroom after hurling a skincare product at his slumbering sister’s head about midnight,
according to police and Yu.

His mother tried to talk to him through the door, but while he initially refused to come out, he later emerged with a knife in hand and attacked his mother and her boyfriend before running away, police said.

Fang had a history of mental illness and was diagnosed with schizophrenia, schizoaffective disorder, paranoid schizophrenia, poly substance abuse, and bipolar disorder.

While in jail, Fang was prescribed medication, but on Aug. 15, 2019, he told staff during a mental health assessment that he ceased taking his medicine and would no longer do so, Yu said.

During follow-up exams, it was “repeatedly explained to Fang the benefits of taking the psychiatric medication, but Fang remained resolute in his refusal to do so,” Yu wrote in his letter.

Fang “complained” Dec. 29 that his cell mate had “punched him and tried to molest him every day,” Yu said.

“Deputies and his cell mate noted that Fang had been talking to himself more frequently,” so he was sent to another mental health assessment when he “admitted he was hearing voices and seeing things, but said he felt fine,” Yu said.

Fang asked how he could “protect himself from getting COVID-19, so he was scheduled for a test and it showed he was infected,” Yu said.

By Jan. 3, a “dry cough” days earlier had worsened and he asked for medicine. The next day he denied experiencing shortness of breath and did not have any other symptoms.

His condition worsened through the day Jan. 5, and by the next day medical staff had him sent to St. Joseph Hospital’s emergency room, Yu said.

When Fang was admitted, officials noted he was “obese,” and was experiencing “shortness of breath, had had intermittent fevers and chills, and had difficulty breathing for the past week with his condition worsening in the past few days,” Yu said. He had symptoms “consistent with pneumonia,” Yu said.

But Fang “refused” blood work and “anticoagulant medication,” despite admonishments that he was at risk of stroke and blood clots, Yu said.

He was treated with oxygen masks, which he would periodically remove, Yu said.

On Jan. 9, he was hooked him up to a Bilevel Positive Airway Pressure machine, but he removed it once, triggering a “code blue,” Yu said.

When his caretakers discussed the possibility of intubation, he rejected it, Yu said.

“Fang said he would like to die peacefully without intubation,” Yu said.

Attempts to reach his family were unsuccessful.

Fang, who was a heavy smoker before his incarceration, was told Jan. 18 that if he continued to refuse intubation he would die, Yu said. But he “reiterated that he did not want intubation and wanted to die peacefully,” Yu said.

He accepted some medication “to make him more comfortable,” but he rejected “comfort care,” Yu said. That limited the amount of morphine they were able to give him.

Fang’s death came just more than a month after 68-year-old Eddie Lee Anderson of River Ridge, Louisiana, became the first inmate to die of COVID-19 while in Orange County custody.

Anderson tested positive while being housed at the Theo Lacy branch jail in December, one of hundreds infected in an outbreak at the county’s lockups. Anderson died Dec. 18 while in a local hospital, said Carrie Braun of the Orange County Sheriff’s Department.

Anderson was charged with the May 18, 1976, murder of Leslie Penrod Harris, who was raped and strangled.