Biden: 96 to 98 Percent of Americans Need to Be Vaccinated to Go Back to Normal 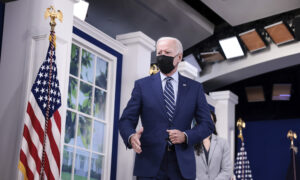 President Joe Biden told reporters at the White House on Monday that 96 to 98 percent of Americans need to be vaccinated before the nation can go back to normal.

“I think we get the vast majority—like is going on in some industries and some schools—96, 97, 98 percent. I think we’re getting awful close. But I’m not the scientist,” the president said in response to a question about how many people need to be vaccinated for the United States to “go back to normal.”

“But one thing for certain: A quarter of the country can’t go unvaccinated and us not continue to have a problem,” the president added.

Biden made the remarks after receiving a booster shot of the vaccine against the CCP (Chinese Communist Party) virus. The Food and Drug Administration approved the booster shot for people 65 and over on Sept. 22.

High vaccination rates in nations around the world have not prevented outbreaks. Israel, where enough vaccine doses have been administered to cover 80 percent of the population, recently recorded one of the highest COVID-19 case rates in the world, according to the Reuters Global COVID tracker.  The United Kingdom, which has administered enough doses to cover almost 70 percent of its population, has averaged the second most COVID-19 cases in the world over the past week.

Biden is scheduled to travel to Chicago on Wednesday to push more businesses to mandate the vaccine. The president had earlier this month ordered his administration to roll out a rule mandating vaccination at private companies with more than 100 employees, the vast majority of healthcare workers, and all federal government employees.

According to a Gallup poll released on Sept. 24, 58 percent of Americans support Biden’s vaccine mandate for companies. Slightly more, 63 percent, support the mandate for healthcare workers.

“Boosters are important, but the most important thing we need to do is get more people vaccinated,” the president said on Monday at the White House, urging businesses to put their own mandates in place.