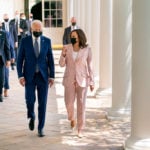 President Biden’s treatment of Border Patrol is only his latest failure of leadership illustrating his unfitness to hold office.

As The Federalist’s Jordan Davidson has documented, the claims that Biden’s border agents were “whipping” or “strapping” illegal “immigrants” and “running them over” with their horses were bald-faced lies. These lies were concocted, amplified, and spread by an unprincipled cabal of Democrat conspirators in Congress, the administration, and the press. Yet the White House has continued to stand by their initial lies.

One of the fundamental principles of leadership is to not blame others, particularly subordinates, for mistakes that are one’s own responsibility. In the vernacular, a good leader does not throw his subordinates “under the bus” to cover his own behind. There is a practical reason for this: It is essential to a well-functioning unit or any organization. Loyalty from the top down will be reciprocated by loyalty from the bottom up. Without both, you will not have a cohesive organization that is able to operate successfully under stress.

Biden violated this principle by throwing his employees – the Border Patrol agents – under the bus in support of a lie to protect his political left flank. That fundamental failure in leadership is one of the reasons Border Patrol morale is scraping the bottom.

One border patrol agent told Fox News, “Would you go to work and do your best knowing that if you do your boss is going to ‘make you pay’?” Another, speaking of the president: “I see the administration wants to fry our agents. He just started a war with Border Patrol.”

The president’s fraudulent charges contribute to the agents’ inability to accomplish their mission effectively. Border enforcement is broken. That is, of course, part of the strategy of this leftist administration and its enablers.

As Rep. Rashida Tlaib, D-Mich., put it, “Cracking a f-cking whip on Haitians fleeing hardship shows you that this system simply can’t be reformed.” She says it “can’t be reformed” because her ilk are trying to overturn (“fundamentally transform” in the words of then-candidate Barack Obama) that system – our system of government. From top to bottom.

A second fundamental trait of good leadership that is absent in this president is honor, which requires moral courage. You cannot have one without the other. One who does not demonstrate moral courage cannot be honorable and is not deserving of the title of “leader.”

Biden has demonstrated neither moral courage nor honor. When the most radical leftists in Congress, such as Tlaib and Reps. Maxine Waters of California, Ilhan Omar of Minnesota, and other unhinged Democrats accused these “whip cracking cowboys” of “inhumane,” “unfathomable cruelty,” and even of “hunting” people down “like runaway slaves,” what did Biden do?

Did he defend the truth or the hard-working border agents working to stem the invasion of the country? Did he call on any of them to cease the divisive race-baiting rhetoric? No. He caved. Even worse, he promised that the results of any investigation would convict the agents, regardless of the facts: “It’s outrageous. I promise you, those people will pay.”

He knew his promises of punishment were based on calumnious lies, but lacking a scintilla of moral courage or honor, he caved anyway. He surrendered to the most unhinged leftists in his own party because he could not summon up the moral courage to disagree with them.

Others in the administration dutifully fell into line. Homeland Security Secretary Alejandro Mayorkas said, “I was horrified by what I saw.” Even though there has yet to be an investigation, he also claimed the actions of the border agents in his department “def[y] all of the values that we seek to instill in our people.”

And here is the Border Czarina herself, Vice President Kamala Harris: “What I saw depicted about those individuals on horseback, treating human beings the way they were, is horrible . . .[H]uman beings should never be treated that way and I am deeply troubled by it.”

Part of a Pattern in Biden’s Character

These actions are not just isolated instances of a lapse of judgment or even of moral courage. They are part of a pattern and show Biden’s ingrained character. Without excusing his past pattern of lies, these are of a different order.

His well-documented history of plagiarism and lying about his grades and law school scholarship could be explained as lies told by an insecure man for self-aggrandizement. These falsehoods are worse, because they are an effort to deflect blame to others for his own failed policies.

Instead of taking responsibility for his own bone-headed border decisions, Biden fixes the blame for the chaotic scenes on the border on low-paid employees, without a thought of the effect on them, their families, or their careers. Why should any border agent think that Biden cares a whit about ruining their lives with his lies, when then-Senator Biden did the same thing to a blue-collar truck driver who was involved in a car accident that resulted in the tragic deaths of Biden’s first wife and infant daughter? For years, even though there was no evidence that the unfortunate man either had been drinking or was at fault, Biden falsely accused him of being an “errant driver who stopped to drink instead of drive.”

If he were a brand-new second lieutenant in any branch of the military, Biden’s demonstrated lack of honor and leadership failings would ensure that he would not be allowed to command so much as a platoon. If he escaped being booted out with a less-than-honorable discharge, his demonstrated lack of moral courage would assure his exile to some obscure assignment where he would not be entrusted with safeguarding any equipment, much less any lives.

Biden has not seen fit to correct any of his inflammatory and false accusations. And he will not, because they fit his strategy of telling the American people what is necessary to advance his radical political goals, “whether it is true or not.” We are in for more of the same as long as this administration is in office, unchecked.

Why The Wall Street Journal Is Wrong About The 2020 Election