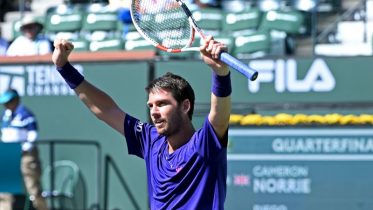 (Reuters) – Cameron Norrie produced a dominant performance to beat Grigor Dimitrov 6-2 6-4 on Saturday to advance to the final at Indian Wells, which will be the Briton’s sixth showpiece match of the year as his breakout season continues.

Norrie raced out to a 4-0 lead and wrapped up the first set in just 31 minutes with a service winner.

Dimitrov attempted to mount a comeback in the second set but after notching impressive come-from-behind victories over Hubert Hurkacz and Daniil Medvedev in his previous two matches, the Bulgarian appeared to run out of gas on a hot day in the California desert.

Norrie, who won his first ATP title at the Los Cabos Open earlier this year, held his nerve to serve out the match and sealed the win when Dimitrov netted a service return.

With the win, Norrie will break into the top 20 for the first time when rankings are updated on Monday.

He will face either American Taylor Fritz or Georgian Nikoloz Basilashvili in Sunday’s final.

Ravens Come Away With Sloppy Victory Over Browns