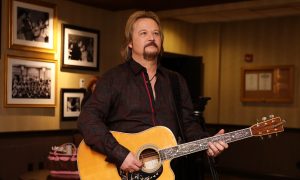 The award-winning performer said in a tweet on Tuesday, “The fear-mongering narrative is breaking down. People who stand up against this narrative scare the hell out of those who promote fear. Hold the line and stand strong.”

The fear-mongering narrative is breaking down. People who stand up against this narrative scare the hell out of those who promote fear. Hold the line and stand strong. 🇺🇸🎸

“I’m putting my money where my mouth is and announcing that any venue or promoter mandating masks, requiring vaccinations, or pushing COVID testing protocols on my fans will not be tolerated,” Tritt said in a statement.

“Any show I have booked that discriminates against concert-goers by requiring proof of vaccination, a COVID test, or a mask is being canceled immediately,” Tritt added.

The country singer noted he has been vocal against mandates “since the beginning” of the COVID-19 pandemic.

“Many people are taking a firm stand against these mandates around the country and I wholeheartedly support that cause. I have been extremely vocal against mandates since the beginning,” Tritt said.

The award-winning artist called the decision “a sacrifice that I’m willing to make,” in his statement.

“This is a sacrifice that I’m willing to make to stand up for the freedoms that generations of Americans have enjoyed for their entire lifetimes. There are plenty of promoters and venues around the country that appreciate fans and the freedom of choice in this great country, and those are the promoters and venues that I will be supporting,” Tritt added.

Tritt apologized to fans who had already purchased tickets to his shows, adding he hopes to reschedule in the future.

“I’m sorry for any inconvenience this situation creates for anyone who had purchased tickets to these shows. We will try to reschedule unrestricted shows in these areas as soon as we can,” the statement added.

At least four scheduled shows have already been canceled. They include Muncie, Indiana; Philadelphia, Mississippi; Peoria, Illinois; and Louisville, Kentucky.

On Monday, Tritt also discussed the issue of freedom during an interview with Steven Crowder during his “Louder with Crowder” program.

Tritt had previously released a statement in September to support those who oppose “any specifc freedoms and basic human rights.”

“The only way these injustices can be defeated is with a unified front against them. Use your voice to stand for what is right and against what is wrong. Long live freedom!” Tritt said.