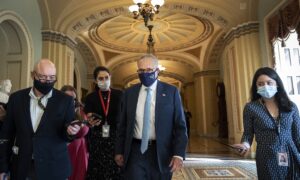 After Democrats gathered at a Tuesday lunch to discuss their long-delayed reconciliation bill, Senate Majority Leader Chuck Schumer (D-N.Y.) reported that there was “universal agreement” that a compromise must be reached as divisions in the party continue to hold up the legislative process.

Democrats are now months off schedule in passing their reconciliation bill, as internal party divisions have pushed leadership past deadline after deadline with no vote.

These divisions, despite months of negotiations, continue, with many moderates still rejecting their party’s bill in whole or in part.

Disregarding these setbacks, Schumer was optimistic after Democrats’ Tuesday lunch. He said that there is “universal agreement in the room that we have to come to an agreement” on the reconciliation bill.

He said that Democrats hope to reach a “framework” agreement by the end of the week.

Speaking to reporters after the lunch, she said that holdouts in the party “are walking through what they support [and] what they don’t support.”

Disagreements on specific political and legal issues have plagued Democrats for months.

Initially, Democratic leaders hoped to have the bill written and passed by the end of September.

The first hint of these challenges came in August, when moderates threatened to derail the budget bill. After weeks of tension between progressives and moderates in the lower chamber, Speaker of the House Nancy Pelosi (D-Calif.) resolved the splits well enough to advance the landmark multi-trillion dollar budget to committee for drafting.

However, once lawmakers began to draft the bills that would be included in the omnibus reconciliation package, continued splits among Democrats became obvious. Even after months of negotiations, moderates and progressives in both chambers have been at each other’s throats.

The situation grew so difficult that President Joe Biden, who is a huge proponent of the legislation, made a rare visit to the U.S. Capitol to meet with the House in a closed-door meeting.

Divisions among Senate Democrats have been especially important. With Democrats’ slim one vote-majority in the upper chamber and a plethora of moderates, Democrats have worked frantically to draft a bill that can meet with moderate approval.

Sens. Joe Manchin (D-W. Va.) and Kyrsten Sinema (D-Ariz.) have made the headlines and remained there for their clearly-stated opposition to the bill. Both publicly rejected giving their vote to such an expensive bill.

Biden, who has remained deeply involved in the legislative process, has extensively negotiated with the two for months, but to little avail. The two remain adamant that they will not support a $3.5 trillion bill, forcing Democratic leaders to admit that the original price tag cannot be achieved.

Now, Democrats continue to shoot for an end of October deadline, when they hope that these disagreements may be finally resolved.

Biden has said that he is not concerned about the ever-extending time table. The president told reporters, “It doesn’t matter whether it’s in six minutes, six days, or six weeks, we’re going to get it done.”

Pelosi said much the same. “We will and must pass both bills soon,” Pelosi said.

Schumer in a statement dismissed the bills’ earlier failures.

“Doing big things in Congress is hard. Doing really big things all at once is really hard,” he wrote, adding that leadership knew “from the very beginning” that passing the two bills would be “difficult and, at times, messy.”

But, he said, “[Democrats] can get this done, together, if we put aside our differences and find the common ground within our party.”

This “will require sacrifice,” he said, adding that “not every member will get what he or she wanted.”

Despite these divisions, Schumer said, “we will pass legislation that will dramatically improve the lives of the American people. I believe we are going to do just that in the month of October.”

On Tuesday, Manchin and Sen. Jon Tester (D-Mont.) weighed in on one of the many Democratic aspirations in the bill: a carbon tax. For Democrats who have marketed the bill as a panacea to the alleged “climate crisis,” a carbon tax or other similar measures are of crucial importance.

But Manchin told reporters that in his mind, “the carbon tax is not on the board at all right now.”

Tester told reporters, “I’m not a big fan of the carbon tax. I just don’t think it works the way it was explained to me.”

As Democratic leaders approach another predetermined deadline at the end of October, time is running out to resolve the party’s many differences.

Joseph Lord
Follow
Joseph Lord is a Congressional reporter for The Epoch Times who focuses on the Democrats. He got his Bachelor of Arts in Philosophy from Clemson University and was a scholar in the Lyceum Program.

Dems Are Out Of Touch With Americans; Waukesha Showed That Hands Down