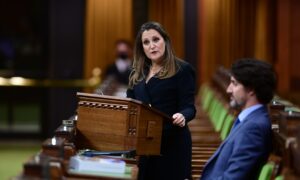 “New normal” federal program spending has reached unprecedented levels in Canada, with per-person spending in 2021 expected to exceed $13,000—a 34.8 percent surge from pre-COVID levels in 2019, according to a new report.

The report, published by the think tank Fraser Institute, notes that the federal government’s spending, adjusted for inflation, would have hit a minimum of $12,695 per person before the 2021 election was called. If the Liberals carry through with the promises they made to increase spending while on the campaign trail, the per person spending would go up to $13,032 in 2021-22. If the NDP’s “even higher spending” proposal is included, it would result in the per-person spending reaching $13,735.

“These levels of per-person spending are unprecedented in Canadian history even when compared to recessions and wartime, excluding the recent COVID crisis,” said Jake Fuss, senior economist at the Fraser Institute and co-author of the report, in an Oct. 14 press release.

The report, “Prime Ministers and Government Spending,” analyzed spending trends since 1870 and found that proposed spending would represent the second-highest level in the country’s history since per-person spending of $17,121 during the height of the COVID-19 pandemic.

The report’s authors argue that since the program spending estimates were calculated based on the numbers contained in the Liberal and NDP platforms in the recent federal election, they would serve as a fairly good guide.

“Given the strong likelihood that these two parties will work in tandem in the minority government, their respective platforms are a good barometer for where spending is headed in the near future,” the report said.

“We used the Liberal party’s estimates from their platform as the lower bound for 2021-22 and 2022-23, while the NDP’s estimates act as the upper bound.”

The report noted that the Liberal party is expected to spend an additional $13 billion in 2021-22 and another $17.7 billion in 2022-23 on top of the program spending levels spelled out in the 2021 federal budget.

“By all indications, the new normal level of federal program spending is substantially higher than even the record-high levels of spending we saw pre-COVID,” Fuss said.

“This high level of deficit-financed spending will have to be repaid eventually, and that will have implications for future taxpayers who will face tax hikes to pay for today’s spending.” Isaac Teo
Follow
Isaac Teo is an Epoch Times reporter based in Toronto.

Palestinian Education Minister to kids: ‘There is no Israel, the entire land is ours, from the River to the Sea’