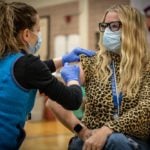 A county council in Elkhart County, Indiana, did something you don’t hear of very often—they said no to “free” federal money. The vote was unanimous.

At issue was a Centers for Disease Control grant for $3 million. About 70 of these grants have been made available nationwide. They include funding to “deploy” community health workers into economically disadvantaged and minority communities, in part to increase Covid-19 testing, contact tracing, and vaccination.

Elkhart County residents, tired of all the restrictions and dictates coming from the CDC, pushed back against the grant and asked leaders not to let their health department accept the money.

Language in the grant was troubling, too. As County Councilman Adam Bujalski noted, one part of the grant read that the recipient would have to “assist the United States Government in the implementation and enforcement of federal orders related to quarantine and isolation.”

“That one sentence is my no,” Bujalski said. “I refuse to say whatever the federal government tells me I have to do I have to do. I will never do that.”

The defeat of the grant was such a blow to the local health officer that she resigned.

When the grant showed up on the commissioners’ agenda in my neighboring county of St. Joseph, I and other residents also moved to kill it. Again, it was the actual grant language that caused the commissioners concern. They didn’t like the fine print that said recipients would have to “comply” with directives and guidance from the U.S. Health and Human Services secretary regarding Covid-19.

The St. Joseph County health officer made light of such language, saying the county didn’t really need to follow it to the letter. One of the three commissioners, who naively suggested the county could just give the grant back if the feds came knocking, was outvoted. The other two commissioners, worried about giving up too much local control, saw the language as a red flag and voted the grant down.

The grant now moves to the county council, where the more Democrat-leaning body is expected to overturn the commissioners’ veto.

The grant fight showcases the increasing irritation with public health’s overreach into all matters Covid. Indiana’s legislature passed a law earlier this year, even overriding the governor’s veto, to prevent local health departments from issuing mask mandates without the vote of a local legislature.

The CDC grant had other issues, too. A big one was how much it grew the size of the local health departments, especially in the wake of state legislation to try and reduce their overreach. St. Joseph County, in particular, issued the first mask mandate in the state (which health officials later admitted was illegal) and got into trouble with the state attorney general for trying to shut down churches. At a time freedom-minded citizens would like to see health departments scale back, the grant would allow the county to hire 10 additional workers and keep pushing Covid initiatives for three more years.

The grant is also big on collecting information. It says: “Recipients will be expected to participate in evaluation activities such as surveys, interviews, case studies, and other data collection efforts.” Additionally, “the recipient is expected to provide to CDC copies of and/or access to COVID-19 data collected with these funds, including but not limited to data related to COVID-19 testing.” At a time of increased government intrusion and mandates, many people are just not comfortable with the idea of the feds gathering so much medical information from citizens.

The grant is directed to what the CDC identifies as “priority populations.” “Priority populations” sounds suspiciously like “unvaccinated populations.” Elkhart County, for instance, wanted to send community health workers into black, Hispanic, and Amish communities. These are all populations known to have lower vaccination rates. St. Joseph County also wanted to pinpoint Walkerton, a more rural area that the county health officer has bemoaned for its lower than average vaccination numbers.

Even the grant description notes upfront that some of these groups may “distrust” medical or governmental entities. Targeted efforts like this may help explain why.

Public health officials, frustrated with the push-back against their efforts, are claiming that politics is hampering their progress. In other words, they don’t like it when publicly accountable—i.e., elected—leaders stand up to mini Anthony Faucis.

Dr. Robert Einterz, the health officer for St. Joseph County, ripped into the commissioners when they denied his grant: “It was political theater on the part of the Commissioners, kowtowing to misinformation and conspiracy theorists.”

An interim health officer in nearby Berrien County, Michigan also cited the “politicization of public health” as her reason for recently resigning. Her county was forced to withdraw a mask mandate for kids in school after the Michigan legislature passed a law that could deny funding to health departments that issued vaccine or mask mandates.

Yet it is precisely because health departments played politics by testing how far they can curtail people’s personal liberties without showing evidence-based rationales that citizens have been forced to fight to regain control. Let’s hope they continue.