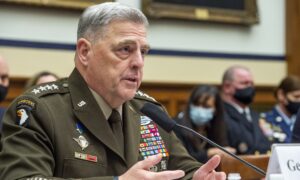 Milley was referring to Soviet Russia’s launch of Sputnik, the world’s first artificial satellite, in October 1957, which caused anxiety in the United States that it was falling behind the Soviet Union in technological advancement. Less than a year later, NASA was established to challenge the Soviets in the Cold War-era space race.

“What we saw was a very significant event of a test of a hypersonic weapon system. And it is very concerning,” Milley told Bloomberg in an interview aired on Oct. 27. “I don’t know if it’s quite a Sputnik moment, but I think it’s very close to that. It has all of our attention.”

The Financial Times first reported earlier this month on the test, saying that the Chinese military in August launched a rocket carrying a glide vehicle that flew through low-orbit space, before missing its target by “about two-dozen miles,” citing unnamed sources.

On Oct. 18, China’s foreign ministry denied any hypersonic missile test, saying that it was a “routine test of spacecraft” that took place in July.

Milley’s statements are significant as they are the first acknowledgment by any U.S. official on China’s suspect test.

Hypersonic missiles can travel at Mach 5, or faster than five times the speed of sound. They could, in theory, be maneuvered to arc over the South Pole to evade U.S. missile defense systems, which are located in the northern hemisphere.

Pentagon spokesman John Kirby declined to comment on Milley’s remarks at a briefing on Oct. 27. Instead, he said, “This is not a technology that is an alien to us that we haven’t been thinking about for a while” and “we have defensive capabilities to that we need to continue to hone in to improve.”

He added: “Our own pursuit of hypersonic capabilities is real. It’s tangible and we are absolutely working towards being able to develop that capability.”

NASA reported on its website that its facility in Virginia launched three rockets on Oct. 20 to support a test by the U.S. Navy and Army to study hypersonic weapons technology.

“It reinforces for us the need to continue to treat the PRC [People’s Republic of China] as our number-one pacing challenge,” Kirby said. “A free Indo-Pacific remains a key national security goal of the United States.”

“They have gone from a peasant army that was very, very large in 1979 to a very capable military that covers all domains, and has global ambitions. China is very significant on our horizon,” he added.

“As we go forward—over the next 10, 20, 25 years—there’s no question in my mind that the biggest geostrategic challenge to the United States is gonna be China.”

China’s suspected hypersonic missile test also serves as a warning about the outflow of U.S. technology to China, as 17 Republicans on the House Foreign Affairs Committee highlighted in their joint letter (pdf) dated Oct. 22 to Commerce Secretary Gina Raimondo.

“Reports that the PRC has tested a nuclear-capable hypersonic missile is a chilling display of Chinese Communist Party (CCP) capabilities and intentions,” the letter stated.

“To make matters worse, it is likely that U.S. software and tools contributed to the creation of this weapons system, because of our country’s permissive export controls and licensing policies with China.”

The lawmakers urged Raimondo to act on their 10 recommendations, which address issues of immediate concern. One recommendation suggests that a quarterly report be submitted to Congress on export control licensing outcomes to parties on the Commerce Department’s entity list, which prevents U.S. companies from doing business with blacklisted companies unless they secure a special government license.

Another suggestion urges the Commerce Department to strengthen its export controls on semiconductors to China.