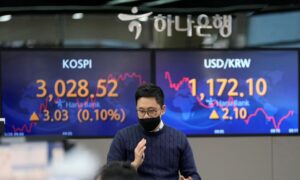 Shares slipped Thursday in Europe and Asia after a retreat on Wall Street pulled the S&P 500 and the Dow Jones Industrial Average back from their latest record highs.

Shares fell in London, Frankfurt, Tokyo, and Shanghai but rose in Paris.

Outside of earnings, investors will get an update on U.S. economic growth when the Commerce Department releases its report on third-quarter gross domestic product on Thursday.

Investors are also looking ahead to the Federal Reserve’s meeting next week to see how it moves forward with plans to trim bond purchases and its position on interest rates.

The future for the Dow industrials was 0.1 percent higher, while that for the S&P 500 also gained 0.1 percent.

On Wednesday, the S&P 500 slipped 0.5 percent and the Dow Jones Industrial Average lost 0.7 percent. The Nasdaq edged up less than 0.1 percent and the Russell 2000 index of small companies took the heaviest losses, falling 1.9 percent.

In Asia, flaring cases of coronavirus in China have added to doubts over the economic outlook, given signs that inflationary trends might lead central banks to step up moves to tighten monetary policy.

In Seoul, the Kospi lost 0.5 percent, to 3,009.55, even after Samsung Electronics reported its highest quarterly profit in three years Thursday thanks to continued robust demand for its computer memory chips.

Samsung’s dual strength in parts and finished products has allowed it to flourish during the pandemic as millions of people were forced to work at home. However, the company said it was dealing with “longer-than-expected” component shortages that may affect the demand for semiconductors during the current quarter.

The Bank of Japan kept its monetary policy unchanged at a meeting that wrapped up Thursday while warning of downward pressure on the world’s third largest economy from the pandemic and from “supply-side constraints” like shipping delays and bottlenecks and shortages of computer chips and other manufacturing materials.

It downgraded its growth forecast for the fiscal year ending in March to 3.4 percent from the 3.8 percent estimate it issued in July. It forecast that inflation would be 0 percent this year, a sharp decrease from its earlier forecast of 0.9 percent.

Sony reported a 54 percent drop in fiscal second quarter profit, mainly from a one-time tax-related gain that had inflated last year’s number, as the Japanese electronics and entertainment company managed to maintain results despite the coronavirus pandemic. The company’s shares fell 1.6 percent on Thursday.

The yield on the 10-year Treasury was steady at 1.55 percent, up from 1.53 percent late Wednesday.