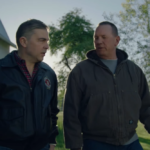 Republicans held onto a U.S. House of Representatives seat in the suburbs of Columbus on Tuesday left vacant by former Rep. Steve Stivers, who resigned to lead the Ohio Chamber of Commerce.

One of three congressional contests on Tuesday, the other in a reliably blue district in Cleveland and a primary in Florida, the race in central Ohio drew national attention with a weekend visit from former Vice President Mike Pence. Carey won a crowded primary in August by a comfortable margin as the Donald Trump-endorsed candidate.

Thank you to everyone who came out on this rainy Saturday to join @Mike_Pence & I for our Upper Arlington door launch!

Election Day is Tuesday. Let’s get out the vote & win! pic.twitter.com/ZKSKYmaTxi

On Monday, President Joe Biden attempted to excite turnout with a late endorsement for Russo.

“I am committed to going to Washington as a unifier, and will work with President Biden and Democratic leaders in Congress to lead a swift health and economic recovery from the pandemic for Ohioans,” Brown said in a statement after defeating Republican business owner Laverne Gore.

House Minority Leader Kevin McCarthy and Republican National Committee Chairwoman Ronna McDaniel took victory laps on Twitter over Carey’s victory in a far more competitive district, touting the landslide win as a sign of what’s to come heading into next year’s midterms. The party in the White House has historically fared poorly in a new administration’s first cycle.

The voters of #OH15 just sent a huge message to Nancy Pelosi, rejecting her socialist agenda.

Thank you, Leader McCarthy! I look forward to working under your leadership. Now let’s #FirePelosi! https://t.co/DQt06dZU9p

Tuesday’s results will leave a slim 221-213 majority in the House for Democrats to defend next year.